I Have a Dream: Exploring Nonviolence in Young Adult Texts 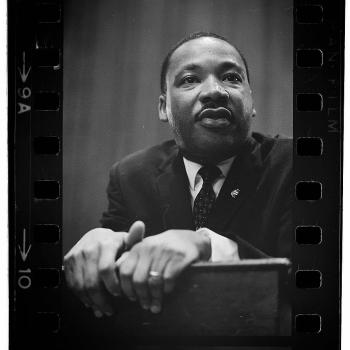 In this lesson, students identify how the rapper, Common and writer, Walter Dean Myers, reinterprets Martin Luther King Jr.'s dream of nonviolence in their own works. This lesson also aims to expose high school students to nonviolent options of conflict-resolution. To activate prior knowledge, students will watch Martin Luther King Jr.'s “I Have a Dream” speech and read Doreen Rappaport's picture book, Martin's Big Words, and recall how he approached conflict. The students will connect Dr. King's answer to conflict-resolution with Common's interpretation of nonviolence, as demonstrated in his song, “A Dream.” The students will also connect this dream of nonviolence to Walter Dean Myers' short story, “Monkeyman,” from the book 145th Street.  Students are assigned a particular homework task prior to reading the short story in order to encourage a text-based discussion on characterization and conflict. The students will be introduced to Dr. King's Six Principles of Nonviolence and compose a thesis essay as a final assessment.

The Teaching of Anti-Violence Strategies within the English Curriculum (Coghlan)

The English classroom offers opportunities to explore conflict resolution strategies through reading and analyzing plot structure, characterization, and point of view in short stories.  Multicultural literature exposes students to various nationalities, religions, socioeconomic classes, and cultures. Through the discussion of multicultural literature and the nature of conflict, empathy for diversity will develop and potentially deter the formation or promotion of intolerant behaviors.

Showcases an online version of the poem "Choose" by Carl Sandburg.

The King Center: Glossary of Nonviolence

Includes information on the King Center and a Glossary of Nonviolence terms.

American Rhetoric – Martin Luther King’s "I Have a Dream" Speech

Includes "I Have a Dream" video for students to view.

Showcases the music video of "A Dream" by Common.

Formally assess the student essays using the Six Principles of Nonviolence Essay Rubric. The goal of this lesson was identifying nonviolent approaches to conflict and the role characterization plays in achieving this resolution in literature. Feedback on the student essays should take into account this focus.

Grades
6 - 8
|
Lesson Plan
|
Standard Lesson
Exploring Free Speech and Persuasion with Nothing But the Truth
Students read Avi's Nothing But the Truth and examine the First Amendment and student rights, and then decide whether the rights of the novel's protagonist, Philip, are violated.
Grades
11 - 12
|
Lesson Plan
|
Standard Lesson
Examining the Legacy of the American Civil Rights Era

Grades
7 - 12
|
Calendar Activity
|
Historical Figure & Event
Dr. Martin Luther King, Jr. delivered his "I Have a Dream" speech in 1963.
Students explore the "I Have a Dream" Foundation's website and brainstorm ways they can help themselves or others at their school achieve their educational dreams.
Grades
7 - 12
|
Calendar Activity
|
Historical Figure & Event
In 1929, Martin Luther King, Jr. was born on this day.
Students study Martin Luther King Jr.'s "I Have a Dream" speech and work in groups to create a mural that depicts Dr. King's vision of peace.
Grades
4 - 12
|
Calendar Activity
|
Historical Figure & Event
Celebrate Mandela Day today.
After reading Kadir Nelson's Nelson Mandela, students explore the Mandela Day website before using an online tool to start working on a service project of their own.