A Tale of a Few Text Messages: A Character Study of A Tale of Two Cities 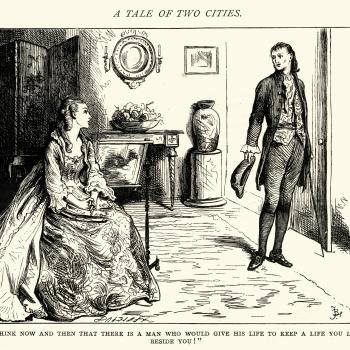 Students engage in a character study of the numerous figures created by Charles Dickens in A Tale of Two Cities.  Students first compare and contrast several forms of communication: email, text message, and telephone.  They then complete a character study chart that breaks down physical background, character traits, social status/background, unanswered questions about the character, and a final judgment about the character.  Next, students will create text messages between numerous characters that show the relationship between the characters, their background, and plot points that they are involved in.  The lesson concludes with students sharing their text messages and a discussion of the rationales behind their choices.

In the NCTE Council Chronicle article “The Shift to 21st-Century Literacies, Sara Kajder explains that as information technologies continue to progress, teachers have opened up what counts as valued communication in the classroom” (4).  One of the many ways that teachers can use the various types of communication is to incorporate the ways that their students are communicating each and every day.  Furthermore, William Kist explains the transition from “page-based to a screen-based society,” contending that "'[i]t's a different way of encountering communication or thought or human expression'" (5).  Inviting students to respond to literature in the format of a series of text messages achieves two goals: It shows that teachers value forms of communication in which students already engage, and it allows teachers to discuss with students ways in which new means of communication are similar to and different from more traditional ways expressing meaning.

This link connects you to a PDF version of the PBS Teaching guide about the Dickens' classic.  This guide presents an integrated approach to teaching A Tale of Two Cities.  The lessons draw parallels between social conditions of the past and present and compare the development of democracy in England, France, and the United States.  The activities in the guide help to develop research, speaking, and debating skills, and promote cooperative learning.

This link connects you to a PDF version of a PBS Teaching Guide about various Dickens books.  This guide does not discuss exclusively A Tale of Two Cities, however it does offer background information on Dickens and general lesson plans.

Grades
9 - 12
|
Lesson Plan
|
Standard Lesson
If a Body Texts a Body: Texting in The Catcher in the Rye
Students imagine the possibilities afforded by text messaging technology in The Catcher in the Rye; They compare and contrast major forms of communication, select points in the novel to represent with text messages, and share and discuss their creative work.
Grades
6 - 8
|
Lesson Plan
|
Standard Lesson
Texting a Response to Lord of the Flies
Students use Lord of the Flies to explore communication styles and techniques by writing text messages from one of the novel's characters to an imagined audience off the island.
Grades
6 - 8
|
Lesson Plan
|
Unit
Beyond the Story: A Dickens of a Party
Students attend a 19th Century Victorian party to celebrate Scrooge's new outlook on life. They research characters from Charles Dickens' A Christmas Carol and assume those personas for the party.
Grades
7 - 12
|
Calendar Activity
|
Author & Text
A Christmas Carol was the first book transmitted over radio!
Students write a script for A Christmas Carol on a level that primary students can read and perform. Older students record the performance and create a website to showcase photographs.
Grades
K - 12
|
Calendar Activity
|
Historical Figure & Event
Celebrate John Venn's Birthday!
Students celebrate the birth of English logician, philosopher, and creator of the Venn Diagram by building community within the classroom by comparing and contrasting likes, dislikes, and characteristics about one another.
Grades
K - 12
|
Student Interactive
|
Organizing & Summarizing
Venn Diagram