In 1564, William Shakespeare was born on this day. 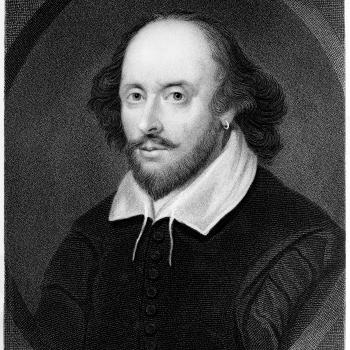 William Shakespeare is the most widely taught playwright in the English language. By 1588, Shakespeare had left his wife and children to live in London as an actor. During the next ten years, he became a successful playwright, performing for the royal court and building a new theater called the Globe. He retired to Stratford-upon-Avon in 1616, where he died soon after. Since that time, few young students of English literature have not heard the line, "O Romeo, Romeo! Wherefore art thou Romeo?"

Students at every grade level can be involved in activities to celebrate Shakespeare's birth.

Elementary students can begin learning about the rhyming structure of a sonnet by using one of the Websites below. They can also begin practicing with the number of syllables in a line.

Introduce middle school students who enjoy insulting one another to the Shakespearean Insult Kit, which includes a selection of Shakespearean invectives. They will gain confidence with the language as well as blow off some steam.

Demonstrate to high school students that Shakespeare always remains relevant through modern updates and reworkings. Select a short scene for your students to read from Othello (e.g., the scene where Iago first tells Othello that his wife might be unfaithful) and then watch the recent adaptation of that scene from the movie O, in which the main character is a basketball star. You can do the same with the sleepwalking scene from Macbeth, and have students watch its updated version in Men of Respect, a modern-dress gangster movie. On a lighter note, The Taming of the Shrew was updated in the movie 10 Things I Hate About You, in which the final party scene is similar, but modernized for a contemporary-and female-audience.

This award-winning website for younger students was created by elementary students at Crichton Park School in Nova Scotia. It contains a collection of materials related to Shakespeare, including resources for teachers.

Mr. William Shakespeare and the Internet

This site is both an annotated guide to Shakespeare resources available on the Internet and a collection of original resources, including a comprehensive timeline of Shakespeare's life and work.

The Academy of American Poets provides this Shakespeare exhibit. Included are selected writings, biographical information, and links to related resources.

This website for the world's largest collection of Shakespeare's printed works contains authoritative articles on his life and work, as well as continually updated links to other related resources.

This lesson introduces students to William Shakespeare's Romeo and Juliet by having them examine the ideas of tragedy and tragic love by connecting the story to their own lives.

Grades
9 - 12
|
Lesson Plan
|
Standard Lesson
Constructing New Understanding Through Choral Readings of Shakespeare
After reading The Tempest or any other play by William Shakespeare, students work in small groups to plan, compose, and perform a choral reading based on a character or theme.
Grades
9 - 12
|
Lesson Plan
|
Standard Lesson
All's Well that Sells Well: A Creative Introduction to Shakespeare
Students compare attending a performance at The Globe Theater with attending a modern theater production or movie. They then create a commercial for an Elizabethan audience promoting a modern product.
Grades
9 - 12
|
Professional Library
|
Book
Reading Shakespeare with Young Adults
Dakin explores different methods for getting students engaged--and excited--about Shakespeare's plays as they learn to construct meaning from the texts' sixteenth-century language and connect it to their twenty-first-century lives.