In 1870, the U.S. Transcontinental Railroad was completed. 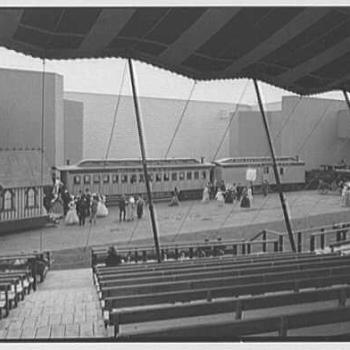 Connecting the United States from east to west, the Transcontinental Railroad was completed in Strasburg (formerly Comanche), Colorado on August 15, 1870. In spite of this fact, the Golden Spike Ceremony celebrating the railroad's completion took place months earlier in a different location: May 10, 1869 at Promontory Summit, Utah.

There are many misconceptions surrounding the completion of the Transcontinental Railroad. The Golden Spike Ceremony that took place on May 10, 1869, at Promontory Summit, Utah was actually arranged at the last minute. Because there were so many people in the area, photographers were unable to get a picture of the event and journalists had difficulty seeing what was happening.

Access the National Park Service website and take a look at the webpage Golden Spike. With your students, explore all the differing accounts of what happened as the railroad neared completion. Discuss the reasons people need and want ceremonies, and why ceremonies, such as the driving of the Golden Spike, may not always match the events that they are intended to celebrate.

New Perspectives on the West

Companion to the PBS series The West, this website includes details on the Transcontinental Railroad in the context of other important events related to America's expansion to the west.

A Brief History of Building the Transcontinental Railroad

Part of the PBS American Experience site, this collection offers numerous resources related to the railroad, including interactive maps, a timeline, a teacher's guide, and much more.

Congress and the American West: The Transcontinental Railroad

One of the "Treasures of Congress," this collection of primary documents tracks the various stages of completion of the Transcontinental Railroad.

Grades
6 - 8
|
Lesson Plan
|
Standard Lesson
Not Your Usual History Lesson: Writing Historical Markers
Students will develop their summarizing skills while learning about local history. They will learn to consider audience while selecting topics, conducting research and interviews, and writing historical markers for their town.