On this day in 1918, the United States passed the U.S. Standard Time Act. 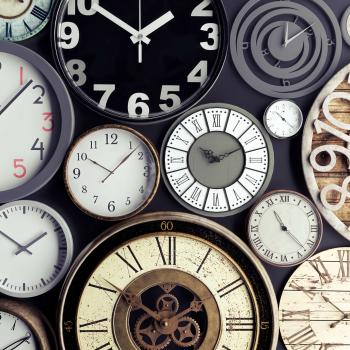 Before the invention of the railroad, people used local "sun time" as they traveled across the country. With the coming of the railroad, travel became faster, exacerbating the problems caused by the hundreds of different "sun times." At the instigation of the railroads, for whom scheduling was difficult, the U.S. Standard Time Act was passed, establishing four standard time zones for the continental U.S. On November 18, 1883, the U.S. Naval Observatory began signaling the new time standard.

If you decide not to carry out an actual video conference, alternatively, divide your class into two groups and allow them to conference with one group playing the role of the class from another time zone.

This page from the Library of Congress' American Memory site offers excellent information and primary documents about the history of standardized time.

A Walk through Time: The Evolution of Time Measurement through the Ages

Students take a journey from ancient calendars and clocks to modern times, at this NIST Physics Laboratory website.

This site provides a clickable map that gives the official time for each time zone in the U.S.

A Brief History of Time Zones

BBC News looks at time zones--how they are worked out, why they cause so many arguments, and how they affect us all.

Do your students detest having to define vocabulary words? Don"t confine them to worksheetsturn the study of affixes and roots into a hands-on contest to create context-rich vocabulary puzzles.