In 1940, musician and peace activist John Lennon was born. 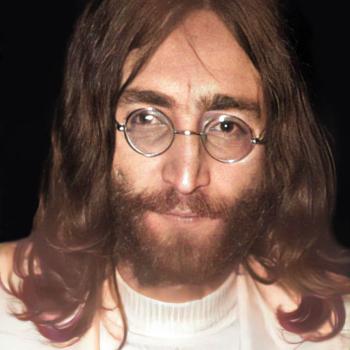 John Lennon, a member of the Beatles, was born on October 9, 1940, in Liverpool, England. With the Beatles and as a solo artist, Lennon was hugely influential musically, culturally, and politically throughout the 1960s and 1970s. Lennon wrote and recorded many songs over the course of his career, including the antiwar song "Give Peace a Chance." He was murdered by a crazed fan on December 8, 1980, in New York City.

John Lennon is well known for many songs; however, his most famous song is probably "Imagine," in which he asks his listeners to consider a world without war and violence. After listening to the song or reading the lyrics, ask students to discuss the following questions, depending upon their grade and skill level:

This media-rich site offers a history and biography of Lennon, as well as videos, drawings, and a discography. Photographs and videos of Lennon are found throughout the site.

This museum site includes a biography and timeline of Lennon, who was inducted into the Rock and Roll Hall of Fame in 1994.

A site created by Yoko Ono in rembrance and celebration of John Lennon.

What does peace mean to you? In this lesson, students attempt to answer this question as they write and perform a short skit that reflects their ideas of peace.

Grades
9 - 12
|
Lesson Plan
|
Standard Lesson
Blogtopia: Blogging about Your Own Utopia
Students work together to create their own utopias, using blogs as the primary source of publication.
Grades
5 - 10
|
Lesson Plan
|
Standard Lesson
Songs of Our Lives: Using Lyrics to Write Stories
Students learn about the life and music of John Lennon, write a short story from their lives integrating lyrics from some of their favorite songs, and create a class book of stories.
Grades
6 - 8
|
Lesson Plan
|
Unit
Exploring Author's Voice Using Jane Addams Award-Winning Books
History has many faces in this lesson in which students read Jane Addams Award-winning books to learn about peace, social justice, world community, and equality.
Grades
K - 12
|
Calendar Activity
|
Holiday & School Celebration
Today is the International Day of Peace.
Students brainstorm a list of current conflicts and why people fight. Groups discuss and present possible solutions and create posters that promote their particular solution.