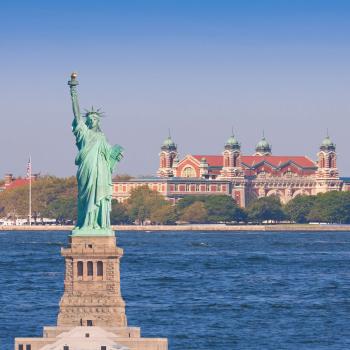 Annie Moore, a 15-year-old girl from Ireland, became the first person to enter Ellis Island on New Year's Day, 1892. In the 62 years that Ellis Island served as the entry point to the United States, over 12 million people were processed through the immigration station. Ellis Island was closed on November 12, 1954. Part of the Statue of Liberty National Monument since 1965, the buildings were restored after decades of disuse and reopened as a museum in 1990.

Take your students on an interactive tour of Ellis Island. Scholastic provides a tour, including audio, video, and photographic resources.

Allow students plenty of time to explore the tour and the resources provided there, supplementing the information with additional resources from the Web Links section below. Be sure to listen to the audio stories of immigrants included in most stages of the tour. Invite students to interview an immigrant in your town to collect his or her story. Students can publish the stories they collect online and read stories published by other students.

To show how children who did come through Ellis Island felt, you might share books such as The Memory Coat (Scholastic, 1999) and Dreaming of America: An Ellis Island Story (Troll Communications, 2001). Based on what they've learned through their exploration of Ellis Island online, their interview with a local immigrant, and in the available texts, have students assume the persona of someone who has just landed on Ellis Island and write a diary entry about his or her experiences. Collect the entries into a class anthology that shows students' understanding of the feelings of people coming to the U.S. for the first time.

This Library of Congress site from the America's Story collection explores the arrival of 15-year-old Annie Moore, the first person to enter the U.S. through the gates of Ellis Island.

This site includes historical information on the role that Ellis Island played in the lives of the more than 12 million people who immigrated to the United States over the course of the 62 years.

Welcome to Immigration: An Interactive Tour of Ellis Island

Ellis Island comes to life in this interactive tour featuring audio, photographic, and video files. This site is part of a Scholastic collection titled Immigration: Stories of Yesterday and Today.

Grades
9 - 12
|
Lesson Plan
|
Standard Lesson
Varying Views of America
Students work together to analyze three poems about America with varying points of view.
Grades
6 - 8
|
Lesson Plan
|
Standard Lesson
Young Adult Literature about the Middle East: A Cultural Response Perspective
Adapted from Sheryl L. Finkle and Tamara J. Lilly's Middle Ground: Exploring Selected Literature from and about the Middle East, this variation on traditional literature circles exposes students to a variety of young adult fiction from and about the Middle East. Students read and share research and responses in collaborative groups. At the end of the lesson, they write a letter to welcome an immigrant student to their school and community.
Grades
4 - 7
|
Lesson Plan
|
Standard Lesson
Boars and Baseball: Making Connections
In this lesson, students will make text-to-self, text-to-text, and text-to-world connections after reading In the Year of the Boar and Jackie Robinson. After sharing and discussing connections, students choose and plan a project that makes a personal connection to the text.