The Brooklyn Bridge opened on this day in 1883. 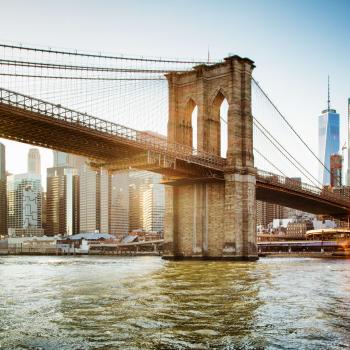 When the Brooklyn Bridge was opened, its span across the East River in New York was the longest in the world, and its two stone landings were the tallest structures in North America. Designed by John Roebling and completed by his son and daughter-in-law Washington and Emily Roebling, the bridge stirred controversy over its cost, size, safety, and even its very necessity.

Celebrate the Roebling family's achievement and explore the literary concept of point of view by sharing with students a pair picture books that highlight the controversies over the construction and opening of the Brooklyn Bridge. The two books, Twenty-One Elephants by Phil Bildner and Twenty-One Elephants and Still Standing by April Jones Prince use the same historical event as their centerpiece: the crossing of the bridge from Manhattan to Brooklyn by the elephants from P. T. Barnum's circus.

The Brooklyn Bridge for Educators

This resource focuses on construction of the Brooklyn Bridge within the historical and political context of the late 19th century. It also treats the bridge as a geographic symbol and work of art which inspires writers, artists, and ordinary Americans who cross the bridge or view it from afar.

This site provides history, video, pictures, and speeches associated with the bridge.

Roebling and the Brooklyn Bridge

This page features the American Memory entry for John A. Roebling's birthday. Included is a collection of primary documents on the Brooklyn Bridge and bridges throughout the United States.

The bridges section of PBS's Building Big website offers information about the science behind bridges, bridge architects, and some famous bridges.

Grades
6 - 8
|
Lesson Plan
|
Standard Lesson
Timelines and Texts: Motivating Students to Read Nonfiction
In an effort to help motivate students to read nonfiction, students are challenged to use a timeline to help them name the year when certain products were invented.
Grades
2 - 4
|
Lesson Plan
|
Unit
All About Our Town: Using Brochures to Teach Informational Writing
Students explore their towns' landmarks, symbols, and people; look at brochures and other informational tools; practice writing for a specific audience and revising; and work collaboratively to create a brochure.