On this date in 1901, Andrew Carnegie gave $5.2 million to New York City libraries. 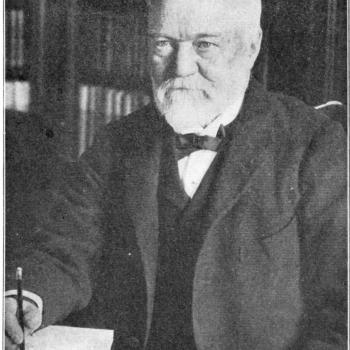 Andrew Carnegie, at one time the richest man in America, was born in Scotland in 1835 and emigrated when he was 13. After making his fortune in railroads, telegraphs, oil, and steel, Carnegie retired in 1901, dedicating his last years to philanthropy. In addition to the donation to NYC libraries, Carnegie helped establish over 2,500 public libraries, as well as teacher pensions, research foundations, and peace endowments. By the time he died in 1919, Carnegie had given away nearly $325,000,000.

With Carnegie's gift in mind, today would be a perfect day for students to practice their expository writing and/or persuasive writing skills.

For expository writing: Carnegie was often referred to as the "Patron Saint of Libraries." Why were libraries so important to him? Although Carnegie was interested in giving, he didn't like "charity."  Instead, he was interested in programs that would help people help themselves. Ask students to explain how funding libraries would be a good way to further the cause of "helping people help themselves." For younger students, ask them to write about at least two ways the library could help them learn important information or skills.

For persuasive writing: Ask students to imagine that they are writing to the Carnegie Foundation in order to fund a project at their school. They should identify a specific need at their school and then convince the donors that their school deserves this money. Writing should include specific information about how the money would be used to benefit their school.

If students write both the expository and persuasive pieces, ask them to compare the essential features of the two modes of writing. Students may find ReadWriteThink's Persuasion Map and Essay Map interactives useful for this activity.

The Richest Man in the World: Andrew Carnegie

This resource is the companion website to the PBS' The American Experience show on Carnegie.

Background information and present activities of the Carnegie Foundation can be found here, written in student-friendly language.

The Elements of Grant Writing guide is a compilation of tips, timelines, and templates from a variety of grant-writing experts and funders designed to aid investigators in successfully applying for grants from federal, foundation, and corporate sources.

There are over 30 different lesson plans and classroom resources about teaching persuasive writing in this collection provided by the Kent School District.

Students explore the nature and structure of expository texts that focus on cause and effect and apply what they learned using graphic organizers and writing paragraphs to outline cause-and-effect relationships.

Grades
K - 6
|
Calendar Activity
|
Holiday & School Celebration
Library Card Sign-up Month begins today.
A school or public library librarian is invited to visit the classroom to talk to the students about the advantages of having a library card. Students then take a library tour to acquaint them with the general features and resources available.
Grades
Grades
K - 5
|
Strategy Guide
Persuasive Writing
This strategy guide focuses on persuasive writing and offers specific methods on how you can help your students use it to improve their critical writing and thinking skills.
Grades
Grades
6 - 12
|
Strategy Guide
Developing Persuasive Writing Strategies
This strategy guide describes the techniques used in effective persuasive writing and shares activities you can use to help students understand and use persuasion in their writing and critical thinking.