Jackie Robinson was born on this day in 1919. 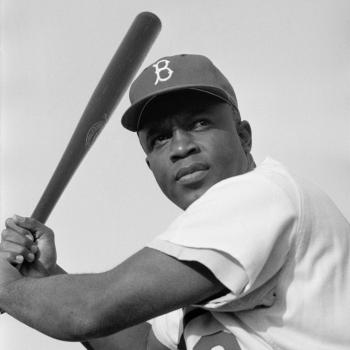 Jackie Robinson, the first African American to play Major League Baseball, was born on this date in 1919. Robinson joined the Brooklyn Dodgers in 1947 and played for the team for nine years. He was voted the National League's Most Valuable Player in 1949, and he was inducted into the Baseball Hall of Fame in 1962. Robinson died October 24, 1972.

In addition to his role as an athlete, Robinson fought publicly to end racial discrimination for others. The U.S. National Archive collection Beyond the Playing Field-Jackie Robinson, Civil Rights Advocate includes messages Robinson sent to the White House from 1957 to 1972. After reading these messages, have students discuss Robinson's attributes as both an athlete and a civil rights activist. They can use the interactive Bio-Cube to organize the information about Robinson. More tips are available for use with the Bio-Cube.

Once your students have a sense of who Robinson was, expand your discussion to the more general issue of the role of athletes in society. Brainstorm a list of attributes important to being a good athlete in any sport at any level of play. Then, in groups, have students select one of the attributes and write about how that character trait would be useful in other areas of life. For instance, a high degree of dedication certainly translates outside of the sports arena. In what other walks of life might dedication be an essential characteristic?

This Library of Congress site presents information about the life and career of Jackie Robinson as well as highlights from a century of baseball.

This Baseball Hall of Fame Web page offers statistics about Robinson's career and his other contributions to baseball.

Read about the life of Jackie Robinson in this interview with his wife, Rachel Robinson, from Scholastic. Robinson answered questions from students during a 1998 live interview.

Grades
6 - 8
|
Lesson Plan
|
Standard Lesson
Play Ball! Encouraging Critical Thinking Through Baseball Questions
Cooperation and critical thinking are the name of the game as students use baseball facts they find online to create trivia questions for a class Jeopardy game.
Grades
3 - 5
|
Lesson Plan
|
Standard Lesson
Biographies: Creating Timelines of a Life
In this lesson students explore a number of sources to create a biographical timeline about a selected person. Students collaboratively research and resolve conflicting information they find during their investigation.
Grades
3 - 6
|
Lesson Plan
|
Recurring Lesson
Guided Comprehension: Previewing Using an Anticipation Guide
Based on the Guided Comprehension Model developed by Maureen McLaughlin and Mary Beth Allen, this lesson introduces students to the comprehension strategy of previewing.
Grades
4 - 7
|
Lesson Plan
|
Standard Lesson
Boars and Baseball: Making Connections
In this lesson, students will make text-to-self, text-to-text, and text-to-world connections after reading In the Year of the Boar and Jackie Robinson. After sharing and discussing connections, students choose and plan a project that makes a personal connection to the text.
Grades
6 - 8
|
Lesson Plan
|
Recurring Lesson
Guided Comprehension in Action: Teaching Summarizing With the Bio-Cube

Students learn the ins and outs of writing biographies by researching a contemporary or historical figure and writing a summary.

Grades
3 - 8
|
Calendar Activity
|
Author & Text
Ernest Thayer, author of the famous poem "Casey at the Bat," was born in 1863.
In small groups or individually, students make baseball cards for the players in the poem "Casey at the Bat." Students can use a word processor or the Character Trading Cards interactive to create their cards.