James Naismith, inventor of the game of basketball, was born in 1861. 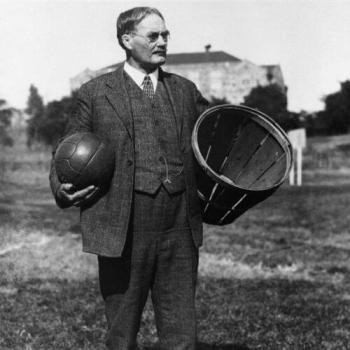 Dr. James Naismith, athletic director of the YMCA in Springfield, MA, had a problem- the cold winters kept everyone indoors. So in 1891, he invented the game of basketball. Players had to throw a soccer ball into a peach basket resting on top of a ten-foot pole. The sport quickly grew in popularity, though amazingly, it took more than ten years for someone to come up with the brilliant idea of cutting a hole in the bottom of the peach baskets!

Looking at the rules of a game allows for a perfect opportunity for students to practice their expository reading and writing skills.

Print out copies of Naismith's original 13 rules for basketball. Put students into groups (since some students know a lot about basketball and some very little) and ask them to read the original rules and to identify-with different colored highlighters-the rules that are still in effect today and the rules that have been changed or eliminated. Then, ask students to write one rule that has been added to the original list and another rule that has been changed dramatically from the original source. Have students present these new and modified rules to the class.

This website includes a biography of Naismith and a section on how the game of basketball has developed over time.

The official name of the Basketball Hall of Fame honors Naismith for his invention of the sport. This website has everything you ever wanted to know about the history and current game of basketball.

America's Story, from the Library of Congress, provides a readable account for kids about the first college basketball game ever played, as well as Naismith's invention of the game.

This excerpt from a January 31, 1939, broadcast of the radio program "We the People" hosted in New York by Gabriel Heatter is believed to be the only known audio recording of Naismith. In the roughly three-minute clip, Naismith discusses setting up the first basketball game with two peach baskets in a gymnasium at the International YMCA Training School (now Springfield College) in Springfield, Massachusetts in December 1891.