Jazz and blues singer Billie Holiday was born in 1915. 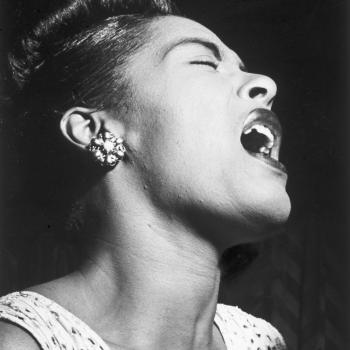 One of jazz's most influential singers, Billie Holiday was born in 1915 in Philadelphia. "Lady Day," as she was later to be known, sang with such intensity and emotion that she made every song her own, whether she wrote it or not. Unfortunately, the blues she sang of were also her reality–she was a terribly unhappy and insecure person and died prematurely in 1959 due to a life of drug and alcohol abuse.

Holiday's most popular and influential song is probably her 1939 recording of Strange Fruit, a haunting depiction of the lynchings of African Americans that were occurring throughout the Jim Crow American South. The link allows you to read the lyrics and also listen to part of Holiday's rendition of the song. Because of the subject matter and the vividness of the song's images, this activity should be reserved for high school or mature middle school students.

The song is a perfect text to use to teach tone. Before explaining the context of the song, have students read the lyrics or listen to the song and identify the most powerful or descriptive images.

Next, share some facts about the lynchings in the South during this period, such as, "Between 1882 and 1968, 3,446 lynchings of African Americans occurred in the U.S." Ask students to try to determine Holiday's attitude toward this issue, which you can then define as the tone of the song. Have students compare the tone of Holiday's song to that of Langston Hughes' poem on the same topic, Song for a Dark Girl. Then apply the concept of tone to another piece you are currently reading.

This comprehensive site on Billie Holiday includes a biography, photos, quotes, and more.

This page provides links to a variety of artist showcases. Audio and video files are provided along with biographical and historical information.

As part of its Independent Lens series, PBS presents the role that protest music has played in American history. The site contains protest music from the days of slavery to the present protests against the war in Iraq.

Grades
9
|
Lesson Plan
|
Standard Lesson
A Harlem Renaissance Retrospective: Connecting Art, Music, Dance, and Poetry
Students research, evaluate, and synthesize information about the Harlem Renaissance from varied resources, create an exhibit, and highlight connections across disciplines (i.e., art, music, and poetry) using a Venn diagram.
Grades
9 - 12
|
Lesson Plan
|
Unit
I've Got the Literacy Blues
Students will be singing the blues in this lesson in which they identify themes from "The Gift of the Magi" and write and present blues poetry based on those themes.
Grades
9 - 12
|
Lesson Plan
|
Minilesson
You're the Top! Pop Culture Then and Now
Students analyze the lyrics to Cole Porter's "You're the Top!" and then update them to include current "tops" in pop culture.
Grades
9 - 12
|
Calendar Activity
|
Author & Text
Their Eyes Were Watching God was published in 1937.
Students brainstorm the kinds of stories they know and where these stories come from. Students return to these questions as they begin reading Hurston's novel.