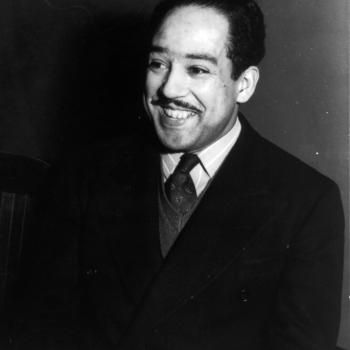 Langston Hughes was one of the chief voices of the Harlem Renaissance and a noted poet and author. Hughes' poems gave voice to an entire generation of African Americans and their experiences, feelings, thoughts, and dreams.

Provide students with a copy of Hughes' poem "Dreams." Each stanza of the poem is one sentence, and each sentence contains a metaphor for a dream. Tell students that a metaphor compares two objects or ideas that are not generally associated with one another. Have them identify the metaphor in each sentence, and then ask them to think about what Hughes was trying to convey about dreams by using these metaphors. What kind of dream would a "broken-winged bird" represent? How about a "field frozen in snow"?

From the Modern American Poetry website, this collection of materials includes biographical information and literary criticism on the poet's works.

Part of The Library of Congress website, this section features photos and biographical information about Hughes and his work.

This webpage from the Academy of American Poets provides information about the life of Hughes and offers a collection of 13 of his poems. Links to other poet pages are also provided.

This site offers a biography of Hughes and some examples of criticism of his work, along with links to many of his poems and articles both by and about him. There are also some audio recordings of his work.

Grades
1 - 12
|
Calendar Activity
|
Holiday & School Celebration
Black Poetry Day is celebrated.
Books and webpages are gathered that focus on the work of African American poets and students explore the resources and find a poem to contribute to a poetry reading.
Grades
9 - 12
|
Calendar Activity
|
Author & Text
Their Eyes Were Watching God was published in 1937.
Students brainstorm the kinds of stories they know and where these stories come from. Students return to these questions as they begin reading Hurston's novel.
Grades
8 - 12
|
Professional Library
|
Book
Langston Hughes in the Classroom: "Do Nothin' till You Hear from Me"
Carmaletta M. Williams provides high school teachers with background on Hughes and the Harlem Renaissance as well as help in teaching Hughes's poetry, short stories, novels, and autobiography.