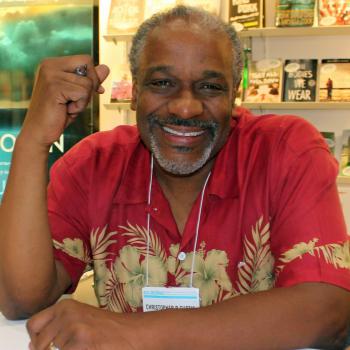 Christopher Paul Curtis, born in Flint, Michigan, in 1953, has earned high praise for his first two novels. Bud, Not Buddy won both the Newbery and Coretta Scott King Medals in 2000 and several other literary awards. The Watsons Go to Birmingham-1963 was a 1996 Newbery Honor Award winner. Curtis continues to write about engaging, interesting characters, and published his most recent book, Mr Chickee's Messy Mission, in 2007.

In The Watsons Go to Birmingham-1963, Curtis examines America's stuggle for civil rights, through the eyes of a family that gets caught up in the turmoil of 1963. Have your students explore a civil rights issue by writing poetry, using the Acrostic Poems interactive. First, as a class, brainstorm a list of civil rights issues, notable figures, places, and events from American history. Examples could include Birmingham, Martin Luther King, Jr., segregation, and Rosa Parks. Then have students use the Acrostic Poems interactive to create their poems.

If you do not have access to the Internet, students can create acrostic poems without using the interactive. First, have each student select a topic for his or her poem. Next, ask them to brainstorm a list of key words that describe or remind them of their topic. Then have students use the list of words they generated to help them write their poems.

Curtis's website offers a collection of resources for teachers and young writers. There is information on his books, teachers' guides, tips for writers, and more.

This page offers an interview with author Christopher Paul Curtis, including information about Curtis's books, writing, career, and background.

This brief biography, from Kidsreads, offers a short interview with Curtis. The page also features links to reviews of Curtis' books.

This page from the ALAN Review features information about Curtis's novel in addition to an interdisciplinary unit. There are math, geography, history, and language arts activities, as well as assessment and project ideas.

Grades
6 - 8
|
Lesson Plan
|
Standard Lesson
Press Conference for Bud, Not Buddy
Students read Bud, Not Buddy by Christopher Paul Curtis, demonstrate comprehension of the story by involving themselves in discussions, and analyze the characters in preparation for a class "press conference."
Grades
6 - 8
|
Lesson Plan
|
Minilesson
Every Punctuation Mark Matters: A Minilesson on Semicolons
Students analyze stylistic choices and grammar use in authentic writing, focusing on the use of the semicolon in Martin Luther King Jr.'s "Letter from Birmingham Jail."
Grades
3 - 5
|
Lesson Plan
|
Standard Lesson
Graphing Plot and Character in a Novel
In this graphical mapping project, students assign a value to the events, characters, and themes in a novel and think about how the elements of the story are all interconnected.
Grades
K - 12
|
Calendar Activity
|
Literacy-Related Event
Take part in the African American Read-In!