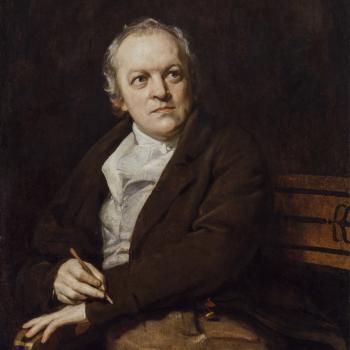 William Blake was born on November 28, 1757, in London, England. While best known for his poetry, including The Songs of Innocence and The Songs of Experience, Blake was also an accomplished artist and engraver who illustrated many of his own poetic works. As a believer in the power of human imagination, Blake influenced those poets and writers who would later be called the Romantics. He died on August 12, 1827, with no money and little recognition.

In his artwork, Blake invented names, faces, and actions that personified abstract concepts. His character, Urizen, for example, represented law and order, and Blake often drew him as a bearded old man.

As a class, brainstorm a list of grade-appropriate abstract concepts, such as "freedom," "anger," "peer pressure," "frustration," etc. Then, have students choose one and write down all the words that they associate with that concept. Finally, students should personify that concept either through a drawing or through a story told about the character who personifies that concept. See "Poetstanding" the Poem for examples of Blake's personification.

Blake's Songs of Innocence and Songs of Experience also work well to develop students' skills at comparing and contrasting. Have students read and complete a Venn Diagram for The Tyger and The Lamb. Elementary students can identify words and phrases that are similar and different in the poems, while older students should be able to identify differences in tone and theme.

This hypermedia project is sponsored by the Library of Congress and the NEH; it contains everything that you might want to know about Blake, including biographies, written work, visual art, and criticism.

This site has 10 full-color images of Blake's paintings and engravings. Show them to students to introduce a discussion on tone; they are extremely powerful pieces.

Chambers of the Imagination

The New York Public Library Digital Gallery offers images of the original versions of three books by Blake, for which he created the text and illustrations and printed the books.

Grades
6 - 8
|
Lesson Plan
|
Standard Lesson
Creative Communication Frames: Discovering Similarities between Writing and Art
Graphic organizers assist the development of comparative vocabulary and generate discussions of analogy and metaphor in art as students go on a real or virtual tour of an art gallery.