Ralph Waldo Emerson was born in 1803. 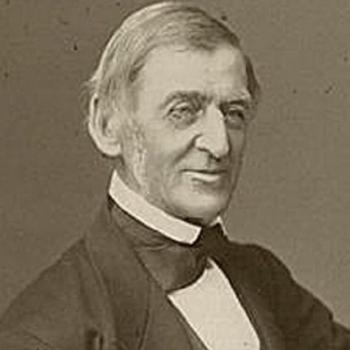 Ralph Waldo Emerson- essayist, poet, and lecturer-was born in Boston in 1803. A founding figure of transcendentalism, Emerson believed that we need to trust ourselves and to live in harmony with nature. His influence on the major figures in American literature, such as Thoreau, Whitman, and Hawthorne, cannot be overstated. At Emerson's funeral in 1882, Whitman called him "a just man, poised on himself, all-loving, all-inclosing, and sane and clear as the sun."

Before sharing the quotation below, ask students to suggest definitions of success. Next, share this quotation which is often attributed to Emerson: "To laugh often and much, to win the respect of intelligent people and the affection of children, to earn the appreciation of honest critics and endure the betrayal of false friends, to appreciate beauty, to find the best in others, to leave the world a bit better, whether by a healthy child or a garden patch, or a redeemed social condition, to know that even one life has breathed easier because you have lived. This is to have succeeded."

Then, identify and list the definitions of success that the author puts forward. Next, ask students to name people they know (not celebrities or politicians) who seem to fit these definitions of a successful person. Last, using the Postcard Creator, have students write a note to a person on the list, explaining why they believe he or she is a success.

Note: There is some question as to whether the above quote in fact can be attributed to Emerson. This might make an interesting research question for students to explore and debate.

American Transcendentalism Web from Virginia Commonwealth University offers this page on Emerson. The Web contains hundreds of articles on Emerson and other transcendentalists.

This resources from PBS includes a biography of Emerson, information about his role in the transcendentalist movement, and excerpts of his work.

Grades
9 - 12
|
Lesson Plan
|
Unit
Examining Transcendentalism through Popular Culture
Using excerpts from the works of Ralph Waldo Emerson and Henry David Thoreau, comics, and songs from different musical genres, students examine the characteristics of transcendentalism.
Grades
3 - 5
|
Lesson Plan
|
Unit
Nature Reflections: Interactive Language Practice for English-Language Learners
Students whose first language is not English reflect on nature through readings, a visit to a green area, and bookmaking using the writing process and peer feedback.
Grades
9 - 12
|
Lesson Plan
|
Standard Lesson
Blogtopia: Blogging about Your Own Utopia
Students work together to create their own utopias, using blogs as the primary source of publication.
Grades
1 - 12
|
Calendar Activity
|
Author & Text
Henry David Thoreau was born in 1817.
Students make mental "snapshots" of a natural setting, then capture the details of their setting by writing and then creating a class booklet of the nature walk.