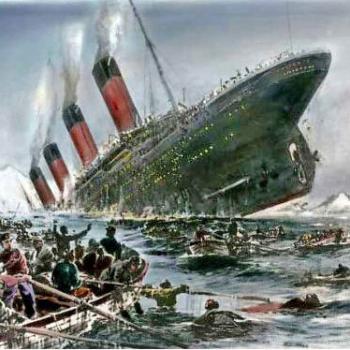 The RMS Titanic, a British luxury passenger liner, sank en route to New York City, and some 1,500 of its passengers perished. The ship had been designed and built by William Pirrie's firm of Harland & Wolff in Belfast, Ireland. A credulous public had believed that design innovations such as its 15 "watertight" bulkheads would make it "unsinkable."

Your students probably had some background knowledge about the Titanic even before the release of James Cameron's movie starring Leonardo DiCaprio and Kate Winslett. A nice way to begin your study is with the Internet Workshop model. You might use the recommended Websites from this calendar entry as part of the Internet Workshop.

Some questions you might ask students to explore are:

Visitors to this website learn about Halifax, Nova Scotia's role during the tragedy's aftermath. Included is a transcript of Robert Hunston's wireless document The Titanic Disaster as Viewed from Cape Race.

This exhibit includes hyperlinks to facts about the Titanic and a large collection of historical photographs.

BBC Archive: Survivors of the Titanic

This site has a collection of fifteen short videos about the Titanic. Included in that collection is an interactive infographic from History.com called "Titanic by the Numbers". The timeline starts with the construction of the Titanic and ends in 1913 with stories from survivors.

Grades
6 - 8
|
Lesson Plan
|
Standard Lesson
Inquiry on the Internet: Evaluating Web Pages for a Class Collection
Students use Internet search engines and Web analysis checklists to evaluate online resources then write annotations that explain how and why the resources will be valuable to the class.
Grades
6 - 8
|
Lesson Plan
|
Standard Lesson
Using THIEVES to Preview Nonfiction Texts
Students become "thieves" in this lesson as they use a previewing strategy to "steal" information from textbooks and other nonfiction texts before actually reading them.
Grades
3 - 5
|
Lesson Plan
|
Standard Lesson
Exploring How Section Headings Support Understanding of Expository Texts
Nonfiction may be dull for some students, but this lesson helps them focus on the main ideas. Through awareness of section headings, students learn to sort and categorize main concepts.