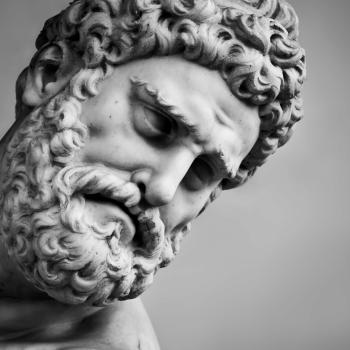 In this lesson students evaluate the changes Disney made to the myth of "Hercules."  By creating a plot diagram of the “real” myth, students hone in on critical differences.  They then document these changes in a Venn diagram and discuss the role of audience and purpose in Disney's decisions through the Think-Pair-Share strategy.  Finally, students evaluate the changes for themselves in a summary and critique writing activity.

This lesson uses the Disney film Hercules as a model, but can be adapted for use with any film with a companion written mythical version.  See the Films Based on Written Myths handout for more suggestions.

Media Education: Where Have We Been? Where Are We Going? (Fuller)

Today’s students must become critical consumers of the media that surrounds them.  As Fuller (1996) explains, consumers of media “tend to suspend disbelief when experiencing media, doubts arising only when first-hand knowledge contradicts media messages.”  He continues that media educators “see a widespread need to teach present and future generations how to employ knowledgeably and critically the many media that inform our cultural environment” (62).

In this lesson, students are exposed to the fact that media producers, including trusted sources such as Disney, will make changes based on purpose and audience; students learn to evaluate the media that surrounds them as opposed to accepting it as fact.  As students employ the Think-Pair-Share conversation strategy, they argue and wrestle with the changes to the myth in an authentic learning community.  Since there are no “right” or “wrong” answers, students then reflect on their conversations with a summary and critique that is derived from their own new complex understanding of a piece of non-print media.

This well-known Internet movie site provides a synopsis of Disney’s Hercules for the teacher’s reference.  Due to ad content, this site should be used for teacher background only.

The Life and Times of Hercules

This site includes the story of "Hercules" along with classical Greek images to accompany the myth.  This site is slightly more geared toward older learners.  Use this site to print a copy of the myth if desired.

Hercules: The Labors of Hercules from Greek Mythology

This site provides an interactive version of the myth of "Hercules."  It is more appropriate for younger students because it does leave out some differences noted in the other version.

This site provides a summary of specific differences between the Disney version and the original myth; it also provides some links to more in-depth articles on specific labors.  The site concludes with a fun video chronicling the 12 labors.

This site gives in-depth information as to the daily life and social structure of Ancient Greece.  This may help provide some background on the audience of “Hercules.”

A teacher’s site from Kilo Middle School, this web page provides some additional information on writing in the third-person in order to achieve a sophisticated tone.

Students explore using electronic messaging and Internet abbreviations for specific purposes and examine the importance of using a more formal style of writing based on their audience.