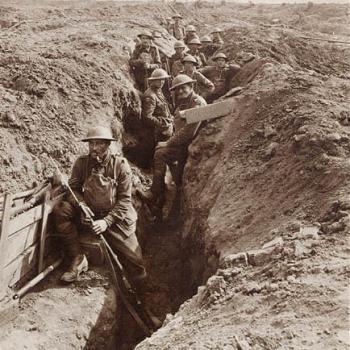 All Quiet on the Western Front ends with a startling and ironic conclusion. Following a chapter that begins with talk of the anticipated armistice, the novel's final short paragraphs unemotionally state that Paul, the protagonist, is killed on a day army reports described as "all quiet on the western front." This ending introduces students to situational irony. After discussing the definition and several examples of situational irony, students explore the novel's concluding passage. Students next choose a possible alternate ending for the book that could still be an example of situational irony. They then retitle the book and rewrite its ending, maintaining the original ironic tone and weaving their new title into the ending as Remarque does. Finally, students design new, symbolic covers for the book, which feature their new titles.

Book Cover Creator: Students can use this online tool to design and print a book cover or dust jacket for a text they have read or have written themselves.

What a Writer Needs (Fletcher)

Endings are perhaps the most important part of any book. The lead may be what draws readers in, but the ending is the final piece that weaves everything together. Ralph Fletcher, in What a Writer Needs, explains that "the ending is far more than the final ribbon that adorns a piece of writing, the rhetorical hair spray to keep everything in place. The ending may well be the most important part of a piece of writing. It is the ending, after all, that will resonate in the ear of the reader when the piece of writing has been finished" (92). At times, as is the case for Remarque's All Quiet on the Western Front, the ending provides a comment on the entire story. In this lesson, students take a serious look at the end of this novel, not just as a summation of events, but as a poignant irony of the cruelties of war. This explicit study of irony is important to helping students develop as critical readers. As Louann Reid states in her introduction to the May 2004 issue of English Journal, "If you don't understand irony, you don't have access to multiple meanings in literary texts. The abilities to decode words and comprehend literally are essential but insufficient. Secondary readers who are reading only literally are not reading successfully."

From the Editor (Reid)

Poets.org: Richard Cory
World War I: Trenches on the Web
A Guide to World War I Materials
Movie Diva on <em>All Quiet on the Western Front</em>

The CD/DVD Cover Creator allows users to type and illustrate CD and DVD covers and related booklets for liner notes and other information. Students can use the tool to create covers for books, music, and films that they explored as well as to create covers for media they compose individually or as a class.