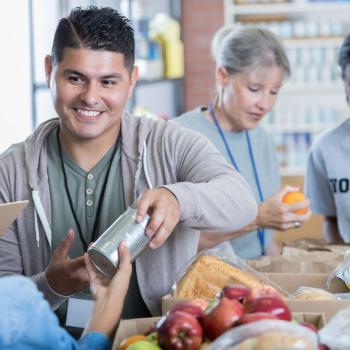 In this lesson, students analyze their own schooling experiences by imagining what their education would be like if service-learning was a requirement for graduation. They engage in a preliminary classroom debate—either agreeing with the proposed change in curriculum, opposing it, or taking a middle-ground stance—before they have all of the facts. From here, students research service-learning and work in groups to prepare informed debates. At the end of this lesson, students reflect on the implications of making uninformed vs. informed arguments as well as what it takes to build a strong, successful argument.

Audience Analysis and Persuasive Writing at the College Level (Black)

When students argue in or out of the classroom, the reasons behind their points of view are often uninformed and lacking support. In other words, students aren't always aware of why they think and feel the way they do or who exactly they're arguing with. This lesson brings to light students' problematic practice of arguing while uninformed and gives them the tools to revise their argumentative methods after becoming more aware of their audience, discussing opposing viewpoints, and conducting research to better understand the subject.

In her article, "Audience Analysis and Persuasive Writing at the College Level," Kathleen Black discusses the results of giving students information about their audience when asking them to write persuasively:

...when students were given accurate audience information (audience knowledge, values, attitudes, and goals in relation to the topic), their identifications of their own arguments, appeals, or adaptations showed a larger number and a higher average level of strategic adaptation than those of students who were not given the information. They were also judged to be more persuasive than those without that information. (246)

In other words, when students are aware of their audience (and informed about the subject about which they are arguing) they become more persuasive and in doing so more able to change people's minds. This activity places the audience literally in the same room with the students, so they will have the opportunity to study and get to know them well before their final debates.

This is the official website for the National Service-Learning Clearinghouse. It offers a comprehensive definition of “service-learning” and includes a fact sheet, history page, and frequently asked questions about service-learning. It also provides examples of service learning projects and lessons. Students will use this site to conduct their research in preparation for their final debate.

Grades
9 - 12
|
Lesson Plan
|
Standard Lesson
Exploring Audience and Purpose with a Single Issue
Students explore the concepts of audience and purpose by focusing on an issue that divided Americans in 1925, the debate of evolution versus creationism raised by the Scopes Monkey Trial.
Grades
9 - 12
|
Lesson Plan
|
Standard Lesson
What Are My Rights? Exploring and Writing About the Constitution

Grades
9 - 12
|
Lesson Plan
|
Unit
MyTube: Changing the World With Video Public Service Announcements
This assignment will go viral with students as they think about the meanings of words and images in public service announcements from YouTube before creating a PSA of their own.
Grades
K - 12
|
Calendar Activity
|
Holiday & School Celebration
May is Get Caught Reading Month!
Students celebrate Get Caught Reading Month by doing a reading-related service project such as planning an intergenerational reading day or organizing a book drive.
Grades
3 - 12
|
Student Interactive
|
Organizing & Summarizing
Persuasion Map