Texting a Response to Lord of the Flies 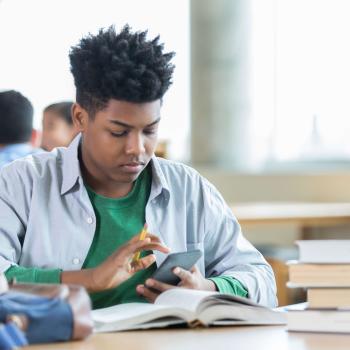 Students engage in a review of Lord of the Flies by looking at various ways the boys used communication while stranded on the island. Using an online graphic map, they chart the ways that communication was—or could have been—used in several key sections of the book, focusing imaginatively on when modern communication (such as text messaging) could have been successful. Once students have focused on when and how more high-tech contact could have been successful, they create a summary of the book from one character's perspective by creating five text messages to an imagined audience off the island composed by that character.

In the NCTE Council Chronicle article "The Shift to 21st-Century Literacies," Sara Kajder notes that as information technologies continue to evolve, teachers "'have opened up what counts as valued communication' in the classroom" (4). One way that teachers can acknowledge the continued rapid shift to more technology-driven communication is to allow students to use communication forms that they already value to achieve literacy goals traditionally associated with the English language arts classroom, such as relating to characters and responding to text.

William Kist points to the specific transition from "a page-based to a screen-based society," contending that "'[i]t's a different way of encountering communication or thought or human expression'" (5). Inviting students to respond to literature in the format of a series of text messages achieves two goals: It shows that teachers value forms of communication in which students already engage, and it allows teachers to discuss with students ways in which new means of communication are similar to and different from more traditional ways expressing meaning.

The Graphic Map assists teachers and students in reading and writing activities by charting the high and low points related to a particular item or group of items, such as events during a day or chapters in a book.