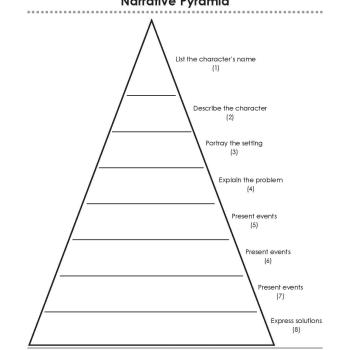 After students read a short story or chapter of a novel, they can use the Narrative Pyramid to reflect on key ideas and details.

Students can use their pyramids to provide informal oral summaries of what they’ve read or as starting points for more extensive writing.

Students learn that the plot structure described by Freytag's Pyramid is actually quite familiar as they diagram the plots of a familiar story, a television show, and a narrative poem.

Students generate descriptive timelines and can include images in the description.

Grades
5 - 9
|
Professional Library
|
Journal
Stop Pretending and Think about Plot
Jago offers a review of Freytag's Pyramid and an example of how work with the concept of plot structure positively affected student understanding and writing.