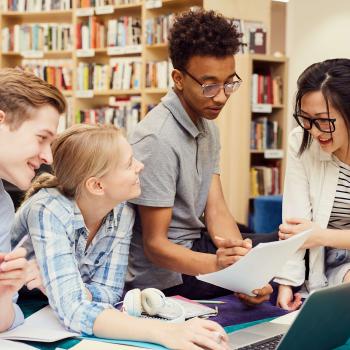 About this Strategy Guide

Students are introduced to Consensus Decision Making through a critical discussion of a text's central ideas. Students first read and discuss issue statements related to the text. They respond to the list of issue statements individually, providing rationale for their positions. Students then discuss their positions in small groups and as a whole class, focusing on the areas that prompted the biggest disagreements among students.

Consensus decision making is predicated on sociocultural learning theory, specifically the notion that knowledge is fundamentally socially constructed. Echoing Vygotsky, Smith and Wilhelm (2006) note “we share our consciousness through conversation and achieve intersubjectivity—the ability to learn by combining our consciousness with another’s. Good reading achieves an intersubjective conversation with an author or characters and then with other readers. Without conversation with others and reflective interaction with the world, we cannot learn anything new; we merely look in the mirror—over and over again” (pp. 83-84). As well, they stress the merit of authentic, open-ended questions centered on issues meaningful to both stupdents and our society.   Whenever possible, we need to make the material personally relevant and afford students the opportunity to develop their thinking and then articulate it to others. Consensus decision making provides a scaffold for critical dialogue between the student and the text, the author, and their peers.

Preparation: Select an appropriate literary or informational text and generate a set of provocative issue statements (eight to fifteen statements work well) concerning the central ideas and themes for the students to discuss. Strive for either extreme or ambiguous wording so as to invite disagreement and debate. Incorporate quoted text and page numbers which the students may refer to in their discussion. A template such as the ReadWriteThink Anticipation Guide may be used and/or adapted.

The following examples are for an eighth/ninth grade discussion of M. T. Anderson’s Feed:

The following sample statements are for an eleventh/twelfth grade discussion of Garrett Hardin’s essay, “Lifeboat Ethics”:

Independent work: Allow students to respond to the list of issue statements individually. While the statements may be presented beforehand, these statements (unlike opinionaires or anticipation guides) should be responded to during or after the reading. Have students respond in writing, rationalizing their position.

Small Group: Have students discuss their individual positions in mixed groups. In addition to reviewing your usual norms for group work, emphasize that students are not to simply vote on the issues; the goal is to reach consensus through critical discussion. The teacher should monitor and facilitate the discussions, directing students to relevant passages in the text, prompting them with real world examples, and ensuring they understand what is at stake. For younger students, the teacher may need to model and provide specific templates such as “I think/ because” or “they say/ I say.” As well, each member should be prepared to report their group’s position to the entire class. Tell students if they are unable to reach consensus they may alter the phrasing of the statement in order to do so.

Whole Class: Set up a grid on chart paper or a whiteboard with the group names along the horizontal axis and the numbers of the statements along the vertical axis. As groups wrap-up their discussions, have one member record their results. (Have students put an asterisk next to any statement they edited, e.g. “SA*”.) Consider having an Anchor Activity for groups that finish early.

When ready, open the discussion to the whole class. It is unnecessary to review all of the statements in a mechanical fashion; instead, focus on those prompting the biggest disagreements. As well, solicit groups that edited various statements to have them explain their rationale.

Grades
9 - 12
|
Lesson Plan
|
Standard Lesson
The Pros and Cons of Discussion
Students use a Discussion Web to engage in meaningful discussion of the question, "Are people equal?"
Grades
6 - 8
|
Lesson Plan
|
Standard Lesson
Textmasters: Shaking Up Textbook Reading in Science Classrooms
Engage students in content area reading with the Textmasters strategy, which allows students to collaborate with their peers in different roles that enable better understanding of the content.
Grades
3 - 6
|
Lesson Plan
|
Recurring Lesson
Guided Comprehension: Previewing Using an Anticipation Guide
Based on the Guided Comprehension Model developed by Maureen McLaughlin and Mary Beth Allen, this lesson introduces students to the comprehension strategy of previewing.
Grades
3 - 12
|
Printout
|
Assessment Tool
Anticipation Guide
Help establish a purpose for reading—and generate post-reading reflection and discussion—with this guide.