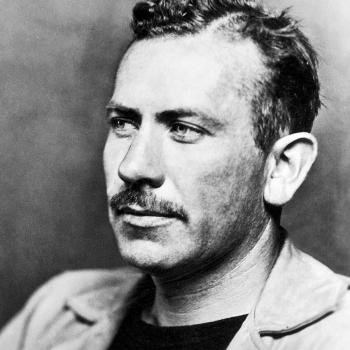 John Steinbeck, one of America's most noted authors and a Nobel laureate in 1962, gave voice to the plight of many different characters in his novels. The Grapes of Wrath, his Pulitzer Prize-winning novel, told of the terrible obstacles faced by the migrant workers who left the Dust Bowl and traveled west searching for work in California.

Steinbeck's works reflect the issues and ills of the time period in which he lived. The Grapes of Wrath, for example, deals with a group of migrant farm workers who moved from field to field. Often, these workers lived in squalid conditions and were paid poor wages. They were forced to purchase their supplies from a company store and then work to pay off their debt, many times without ever seeing a penny of their wages. Present students with information about the Dust Bowl and the flight of many farm workers west to California.

Ask students, "If Steinbeck were to write today about the ills of society, what topics or subjects might he find to address?" Brainstorm with the class a list of possible topics. Have groups of students each research a topic of their choosing and prepare an annotated bibliography of fiction and nonfiction texts that address the topic. The bibliographies can later be used as a school library resource.

The National Steinbeck Center is a museum in Salinas, California where Steinbeck was born. This site has information about his life and changing exhibits relating to his work and the time period during which he lived.

Nobelprize.org presents a brief biography of Steinbeck, along with the Nobel presentation speech and a short film of the event.

Present at the Creation: <em>The Grapes of Wrath</em>

NPR provides this resource, which includes an audio report on the story behind the creation of The Grapes of Wrath.

This PBS website offers information about the American Experience film Surviving the Dust Bowl. There are also links to a teacher's guide, a timeline of events, a map, and related resources.

The Wrath of the Dust Bowl

This article discusses Steinbeck's Grapes of Wrath within its historical context of the Dust Bowl.

Using The Grapes of Wrath as a backdrop, students conduct research on issues that the novel addresses, publishing their findings in a multigenre museum exhibit.

Grades
4 - 6
|
Lesson Plan
|
Standard Lesson
Guided Comprehension: Making Connections Using a Double-Entry Journal
Based on the Guided Comprehension Model by Maureen McLaughlin and Mary Beth Allen, this lesson helps students learn three types of connections (text-to-text, text-to-self, and text-to-world) using a double-entry journal.
Grades
K - 2
|
Lesson Plan
|
Standard Lesson
Write Right Back: Recognizing Readers' Needs and Expectations for E-mail Replies
Students who know how to compose and send simple e-mail messages learn to use the reply function with audience needs and expectations in mind.
Grades
9 - 12
|
Lesson Plan
|
Standard Lesson
Chasing the Dream: Researching the Meaning of the American Dream
By conducting interviews, sharing and assessing data, and writing papers based on their authentic research, students reach their own conclusions on the meaning of the American Dream.