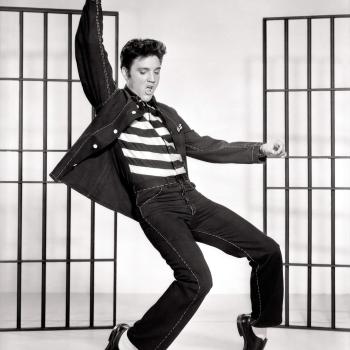 Elvis is known throughout the world as the "King of Rock 'n' Roll." Over one billion of his records have been sold. Elvis starred in 31 feature films as an actor, gave over 1,100 concert performances, and received numerous awards. Graceland, Elvis Presley's home, is the most famous home in America after the White House, attracting over 600,000 visitors every year. In 1970, Elvis went to the White House to offer his assistance to then-President Nixon in the nation's war on drugs.

Invite your students to tour the National Archives exhibit When Elvis Met Nixon, where they can read the five-page letter that Presley personally delivered to the White House, the story of the famous meeting (with accompanying photos), the agenda for the meeting, and the thank-you letter Elvis wrote to the President after the visit.

After reading these primary documents, younger students can discuss the reasons Elvis wanted to meet the President; then, they can explore what would happen if a contemporary recording artist were to meet with the President today. Referring to the agenda for Elvis's meeting, have students work collaboratively to create an agenda for a contemporary artist. Have them use the interactive ReadWriteThink Letter Generator to write a letter to the artist suggesting a meeting with the President to discuss the problem of drugs, racism, violence, or another contemporary issue. More tips are available for use with the Letter Generator.

Older students might explore the various ironies of the meeting in a discussion of Nixon's political motivations for agreeing to the meeting and Elvis's interest in being made a "Federal Agent at Large" who would fight drug abuse and the Communist threat.

Thanks to the Freedom of Information Act, you and your students can browse over 600 pages of information that the federal government collected in relation to Elvis Presley. Pair this site with exploration of the Fensch book in the Texts section to introduce students to the process by which primary documents become fodder for research!

The Rock and Roll Hall of Fame's online Elvis exhibit describes his career and the artifacts included in the original exhibit. Be sure to see the biographical page on this 1986 inductee.

This PBS Culture Shock resource offers information about the controversy over Elvis's early television appearances on the Milton Berle Show, the Ed Sullivan Show, and the Tonight Show.

Grades
3 - 5
|
Lesson Plan
|
Standard Lesson
The Connection Between Poetry and Music
Students won't miss a beat in this reading fluency lesson that combines music and poetry.
Grades
6 - 8
|
Lesson Plan
|
Standard Lesson
Critical Media Literacy: TV Programs
By critically analyzing popular television programs, students develop an awareness of the messages that are portrayed through the media.
Grades
6 - 8
|
Lesson Plan
|
Unit
The History Behind Song Lyrics
Students research the items listed in the song "We Didn't Start the Fire" by Billy Joel, noting their historical relevance, and then document their findings using an online chart.
Grades
9 - 12
|
Lesson Plan
|
Unit
Copyright Infringement or Not? The Debate over Downloading Music
This lesson takes advantage of students' interest in music and audio sharing. Students investigate multiple perspectives in the music downloading debate and develop a persuasive argument for a classroom debate.
Grades
9 - 12
|
Lesson Plan
|
Unit
Music and Me: Visual Representations of Lyrics to Popular Music
Students will whistle while they work on this lesson, creating a photomontage movie of their interpretation of a favorite song's lyrics that will end everyone's day on a high note.