In 1939, Marian Anderson was denied permission to sing at Constitution Hall. 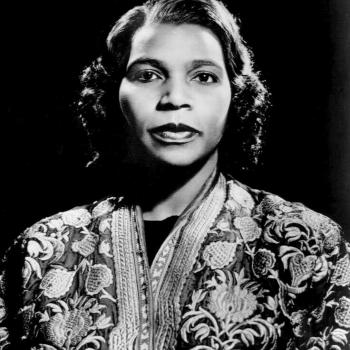 Marian Anderson planned on singing at Constitution Hall in Washington, DC, which was owned by the Daughters of the American Revolution (DAR). They refused to let her perform because she was African American. Eleanor Roosevelt, outraged by this show of prejudice, arranged for Anderson to sing at the Lincoln Memorial instead.

When Eleanor Roosevelt learned that Marian Anderson had been denied permission to sing at Constitution Hall in Washington, DC, she decided to resign her membership in the Daughters of the American Revolution (DAR). Show your students her resignation letter, along with the letter from Mrs. Henry M. Robert, Jr., president general of the DAR, responding to Roosevelt's resignation (pages one and two). Students may have difficulty reading the handwritten text so, after viewing the original documents, you may want to transcribe them.

Ask your students to write a letter to a newspaper editor explaining their feelings about a present-day social injustice. Invite your students to compose their letters with the Letter Generator.

Read the transcript of this PBS report on Anderson's life, which includes comments by Anderson, her family, and her friends and colleagues.

Marian Anderson: A Life in Song

This resource is from the Annenberg Rare Book and Manuscript Library. The site offers video and audio excerpts of Anderson's concerts and interviews.

These pages from the Library of Congress' America's Story site provide information about Anderson for elementary students.

This DAR press release paid tributeto Marian Anderson's memory and commemorated a pivotal event in the struggle for racial equality.

Students research, evaluate, and synthesize information about the Harlem Renaissance from varied resources, create an exhibit, and highlight connections across disciplines (i.e., art, music, and poetry) using a Venn diagram.

Grades
6 - 12
|
Calendar Activity
|
Historical Figure & Event
Constitution Day is observed today in the U.S.
Students explore an annotated online version of the Constitution before sharing what they learned about one aspect of the document through the Trading Card interactive.