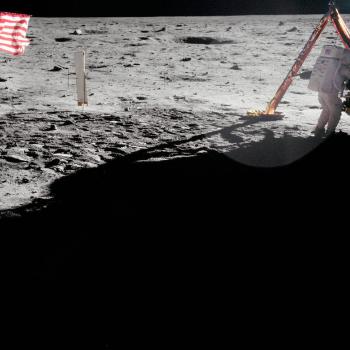 "That's one small step for man, one giant leap for mankind." With those words, Neil Armstrong was the first person to step on the moon. Armstrong's historic first step on July 20, 1969, was a hallmark mission in the U.S. space program and marked the first time humans stood physically on a celestial object other than Earth. See Armstrong's biography for a movie showing the historic moment.

The words Armstrong spoke (audio from NASA) as he stepped onto the moon were carefully chosen. Even so, Armstrong is reported to have made a mistake. NASA planned for Armstrong to say, "That's one small step for a man, one giant leap for mankind" (emphasis mine); however, he left out the word "a" when he stepped onto the moon's surface. Begin your exploration of Armstrong's famous words by discussing the all-important difference that one word can make. Take the opportunity to discuss the gendered language that Armstrong uses as well.

After exploring Armstrong's words in detail, turn to a discussion of why those words were chosen. In a speech at Rice University on September 12, 1962, President John F. Kennedy said, "We choose to go to the moon! We choose to go to the moon in this decade and do the other things-not because they are easy, but because they are hard. Because that goal will serve to organize and measure the best of our abilities and skills, because that challenge is one that we are willing to accept, one we are unwilling to postpone, and one which we intend to win."

Apollo 11 and NASA's Next Giant Leap

This webpage developed by NASA Kids celebrates the 45-year anniversary of Armstrong landing on the moon. The site is intended for elementary readers, and includes photos and a tool to calculate your weight on other planets.

The Impact of the Moon Landing

This site from Smithsonian includes basic historical facts about Apollo 11, along with photos and actual audio files of Armstrong's first words on the moon.

Apollo to the Moon

The Smithsonian National Air and Space Museum is host to this collection of pages featuring details on the Apollo missions, including quotations from the people involved, photos with the ability to zoom, and a list of artifacts in the gallery.

Grades
K - 2
|
Lesson Plan
|
Standard Lesson
Blast Off! Vocabulary Instruction Using a Virtual Moon Trip
3, 2, 1... Blast off! Students learn new vocabulary by taking a virtual field trip to the moon, read-alouds, creating a picture dictionary, and completing a final writing activity.
Grades
3 - 5
|
Lesson Plan
|
Recurring Lesson
My World of Words: Building Vocabulary Lists
Working in small groups, students select vocabulary words and research their meanings. In a culminating activity that uses text and illustration, each student creates a "My World of Words Journal."
Grades
6 - 8
|
Lesson Plan
|
Unit
Astronomy Poetry: Combining Poetry With the Content Areas
Students' responses to this lesson will be out of this world after they've researched astronomy to write poetry and compile a poetry book.
Grades
5 - 12
|
Calendar Activity
|
Historical Figure & Event
The first picture of Earth was taken by the U.S. satellite Explorer VI in 1959.
After students view the first picture from the Explorer VI Satellite, they discuss the differences between this first image and the images of the earth that we typically see today.
Grades
3 - 12
|
Calendar Activity
|
Historical Figure & Event
The Space Shuttle Challenger exploded in 1986.

Students interview a parent or another adult about the Challenger and hypothesize about differences. Students can also write about the Columbia disaster in 2003.