The Space Shuttle Challenger exploded in 1986. 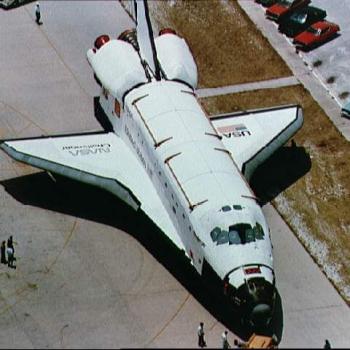 In 1986, the Space Shuttle Challenger exploded, 74 seconds after launching from the Kennedy Space Center in Florida. All seven astronauts on board were killed, including teacher Christa MacAuliffe, who was to have been the first U.S. civilian in space. Hundreds of millions of people around the world watched the explosion on television.

Students will not have first-hand memories of the explosion, so interviewing an adult about the events of that day is one way for students to obtain information while learning more about how to conduct an interview.

In groups or individually, have students interview a parent or another adult on the subject; then, have them share the information they gather. In particular, ask students to consider whether everyone interviewed had the same memories and recollections. Encourage them to hypothesize about possible reasons for the differences.

Alternatively, ask middle or high school students to write about their own recollections of the Columbia disaster from February 2003. Have students compare accounts of the events, again noting differences and possible reasons for those differences. Have students research another historic event from multiple perspectives.

The New York Times Learning Network provides this article about the Challenger disaster that appeared in the Times on the day of the explosion.

In August 2007, Barbara Morgan, who trained with Christa MacAuliffe as back-up candidate for NASA's Teacher in Space program, finally travelled in space as part of the mission STS-118 crew. Read about the mission and Morgan's experience at this NASA page.

NASA and the Challenger Center for Space Science Education shares a video of astronaut-educator Ricky Arnold performing one of McAuliffe’s experiments aboard the International Space Station.

Grades
K - 2
|
Lesson Plan
|
Standard Lesson
Blast Off! Vocabulary Instruction Using a Virtual Moon Trip
3, 2, 1... Blast off! Students learn new vocabulary by taking a virtual field trip to the moon, read-alouds, creating a picture dictionary, and completing a final writing activity.
Grades
3 - 5
|
Lesson Plan
|
Standard Lesson
Creating Family Timelines: Graphing Family Memories and Significant Events
Students interview family members, and then create graphic family timelines based on important and memorable family events.
Grades
6 - 8
|
Lesson Plan
|
Unit
Exploring and Sharing Family Stories
Writing gets personal when students interview family members in order to write a personal narrative about that person.
Grades
9 - 12
|
Lesson Plan
|
Standard Lesson
The Year I Was Born: An Autobiographical Research Project
Students explore the year they were born through interviews and research, and then weave the details into a newspaper or booklet, written from another person's point of view.
Grades
3 - 8
|
Calendar Activity
|
Historical Figure & Event
Sally Ride, first American woman in space, was born in 1951.
After exploring information about Sally Ride on the StarKids Who's Who site, students write a letter using the Letter Generator to Dr. Ride's foundation, Sally Ride Science.
Grades
9 - 12
|
Calendar Activity
|
Historical Figure & Event
In 1969, the first human walked on the moon.
As a class, students discuss Neil Armstrong's famous quote when he landed on the moon and explore the difference that one word can make, as well as the gendered language that Armstrong uses.