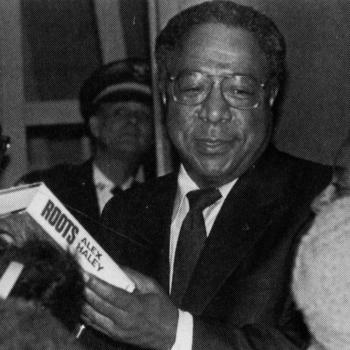 Alex Haley's first notable work was as editor of The Autobiography of Malcolm X. He is most remembered for Roots: The Saga of an American Family, which earned a Pulitzer prize in 1976, and then became a very successful television mini-series in 1977. The story, about African slaves brought to America, was based on Haley's search into his own ancestry. Queen, a sequel to Roots, followed in 1993.

Have students explore their own roots by interviewing family members. Students then use their family history as a basis for their writing.

The foundation provides a variety of community and educator resources. Teachers can find information on genealogy, biographies of Haley and Kunta Kinte, timelines of African-American history, and more.

This teacher's guide is provided by Random House publishers. The page includes discussion questions, as well as a variety of activity suggestions for the classroom.

This website offers tips to get you started researching your own family history. Included is information about organizing the information you already have, using military records, census data, libraries, and other resources in your research, and sharing your family history.

The Genographic Project traces human ancestry through DNA. Individuals can learn about their own history by buying and using a kit prepared for the project.

Following the model of N. Scott Momaday's The Way To Rainy Mountain, students write three-voice narratives based on Kiowa folktales, an interview with an Elder, and personal connections to theme.

After analyzing Family Pictures/Cuadros de Familia by Carmen Lomas Garza, students create a class book with artwork and information about their ancestry, traditions, and recipes, followed by a potluck lunch.

Grades
6 - 8
|
Lesson Plan
|
Standard Lesson
My Life/Your Life: A Look at Your Parents' Past
Past and present come together when students interview their parents and create a skit that compares their parents' experiences as middle schoolers with the students' own lives.
Grades
9 - 12
|
Lesson Plan
|
Unit
Family Memoir: Getting Acquainted With Generations Before Us
Creating a memoir of an older family member allows students both to learn more about their own backgrounds and to learn the power of storytellers.
Grades
K - 12
|
Calendar Activity
|
Literacy-Related Event
Take part in the African American Read-In!