Amelia Earhart completed her solo flight from Honolulu to Oakland in 1935. 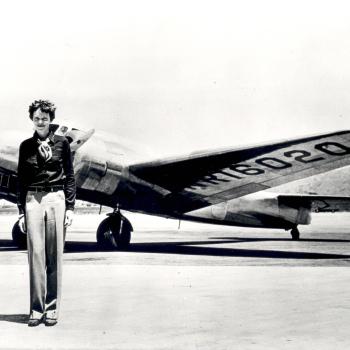 Amelia Earhart was born in 1897. Once she began flying in 1921, she quickly set numerous women's altitude, speed, and distance records. On this day in 1935, Earhart became the first person-male OR female-to fly solo from Hawaii to California. On June 1, 1937, Earhart began her last journey: to fly around the world. After successfully flying 22,000 miles, she failed to arrive at a scheduled stop on Howland Island in the Pacific. No trace of her or her plane has ever been found.

Heroes come in many shapes, sizes, situations, and packages. A hero to one person is not necessarily a hero to another. This day in history provides a chance for students to explore the definition of a hero. Have students ask at least three people (one who is their age, one who is younger, and one who is older) these questions:

Once they've gathered their interview answers, ask students to share them with the class. Have them explore, as a class, the characteristics that are repeated and the reasons for any commonalities found in the results. Additionally, ask students to note anything particularly unusual in the responses. Then, use the interactive Venn diagram to create a classroom Venn diagram with three circles, each identifying one of the most common characteristics of a hero. Finally, have students place each of the heroes' names on the appropriate place in the Venn diagram.

When everyone has had a chance to share their findings, students can create posters that include pictures of their own heroes and words that describe the qualities that make each one heroic.

The Flight of Amelia Earhart

This page, part of the Women Who Changed History section of the Scholastic website, provides a teacher's guide and student activities related to Amelia Earhart.

The My Hero Project

This site invites people around the world to publicly celebrate their heroes through images, video, and text.

Grades
6 - 8
|
Lesson Plan
|
Standard Lesson
Heroes Around Us
Students select, read about, and report on a hero and then identify how their hero matches certain criteria and characteristics. Hero reports are then compiled into a class book.
Grades
9 - 12
|
Lesson Plan
|
Unit
Heroes Are Made of This: Studying the Character of Heroes
Designed to explore the hero and the heroic in literature, this unit asks students to discuss their ideas of heroism and analyze heroes in literature.
Grades
9 - 12
|
Lesson Plan
|
Standard Lesson
Discovering a Passion for Poetry With Langston Hughes
Through a study of Langston Hughes' poetry, students connect his writing to his place in history.
Grades
3 - 6
|
Calendar Activity
|
Historical Figure & Event
The Wright brothers made their phenomenal flight!
Students celebrate the Wright brothers' flight in 1903 by having a classroom celebration that includes a multimedia timeline and comparisons of the Wright Flyer to the planes we have today.
Grades
3 - 12
|
Calendar Activity
|
Historical Figure & Event
Charles Lindbergh began his transatlantic flight in 1927.
Students consider what is meant by the phrase "Human Hero," think of people who fit into the category, and read a biography of a selected hero.
Grades
K - 12
|
Printout
|
Graphic Organizer
Venn Diagram, 3 Circles
Students use this graphic organizer to describe similarities and differences between three objects or ideas.