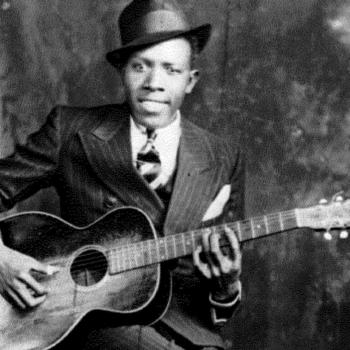 Known as the "King of the Delta Blues," Robert Johnson was born May 8, 1911, in Hazelhurst, Mississippi. His legendary recordings of such blues standards as "Cross Road Blues" and "Sweet Home Chicago" have had an astounding influence on blues singers and rock musicians for generations. His amazing talent and mysterious death in 1938 sparked an old blues folk tale that he sold his soul to the Devil in exchange for his ability to play the guitar.

Having students write their own blues lyrics is a great way to teach rhythm, rhyme, and word choice. The most common form of the blues is referred to as the "12-bar blues" because of the twelve measures that are typical of the style. Share a blues song with your students before they begin to write, and distribute copies of the lyrics to a song with this structure. You may want to play a clip from Robert Johnson's "Cross Road Blues."

After looking at the lyrics, ask students to identify the structure used. They should be able to see that the lyrics of a 12-bar blues song often follow an AAB pattern. "A" refers to the first and second four-bar verses, and "B" is the third four-bar verse. In a 12-bar blues song, the first and second lines are repeated, and the third line is a response to them-often with a twist.

Next, brainstorm a list of subjects with your students about things that might give them "the blues." Then, have students choose a topic and try to write a blues song that follows the pattern they identified. Invite adventurous students to perform their songs!

This site anchors a multi-media celebration that raises awareness of the blues and its contribution to American culture and music worldwide.

The Robert Johnson Blues Foundation is dedicated to preserving the music and memory of Robert Johnson through the provision of art education, competitions and scholarships.

Trail of the Hellhound: Delta Blues in the Lower Mississippi Valley

This National Park Service site includes an overview of two styles of blues and extensive biographies of thirty bluesmen and blueswomen who created a rich legacy of American music that forms the foundation of today's popular music.

Grades
9 - 12
|
Lesson Plan
|
Unit
I've Got the Literacy Blues
Students will be singing the blues in this lesson in which they identify themes from "The Gift of the Magi" and write and present blues poetry based on those themes.
Grades
9 - 12
|
Lesson Plan
|
Standard Lesson
Put That on the List: Collaboratively Writing a Catalog Poem
Using the structure of a list poem, students combine creative expression with poetic techniques and language exploration in order to write group poems about what really matters in their lives.
Grades
9 - 12
|
Lesson Plan
|
Unit
Music and Me: Visual Representations of Lyrics to Popular Music
Students will whistle while they work on this lesson, creating a photomontage movie of their interpretation of a favorite song's lyrics that will end everyone's day on a high note.
Grades
3 - 5
|
Lesson Plan
|
Standard Lesson
The Connection Between Poetry and Music
Students won't miss a beat in this reading fluency lesson that combines music and poetry.