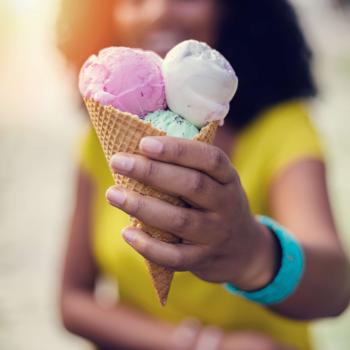 Ice cream has been around since long before 1786. Emperor Nero of Rome had his slaves get snow from mountains then had it mixed with nectar, fruit pulp, and honey. Marco Polo brought recipes for water ices to Europe from the Far East. Ice cream first appeared in Italy when it was discovered that ice and salt could cause freezing.

During the warm month of June in the northern hemisphere, the topic of ice cream can be quite refreshing. The weather was probably hot in 1786 when Mr. Hall of 76 Chatham Street advertised the first commercially made ice cream. How has advertising changed over the years? Find some advertisements in newspapers, magazines, or on the Internet, or share these vintage ice cream advertisements. Evaluate the ads you have chosen with the ReadWriteThink Advertisement Dissection and Analysis printable activity sheet.

Extend students' learning by sharing this activity with their families or afterschool providers. The activity reinforces procedural writing by having students write a recipe for an ice cream sundae.

Don't Buy It: Get Media Smart!

This site from PBS Kids Go! encourages young people to think critically about media and become smart consumers. Activities on the site are designed to provide users with some of the skills and knowledge needed to question, analyze, interpret, and evaluate media messages.