Frederick Douglass began publication of The North Star today in 1847. 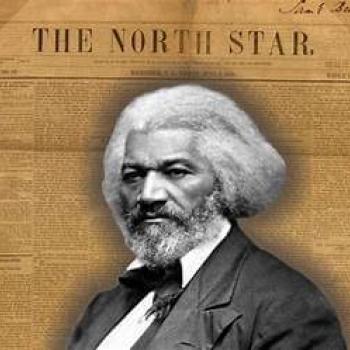 Inspired by William Lloyd Garrison's abolitionist newspaper, The Liberator, Frederick Douglass collaborated to found The North Star in 1847.  The paper, named for the star that guided runaway slaves to freedom from the South, was published weekly and included current news from the abolitionist movement, as well as editorials, articles, poetry, and advertisements.  The North Star took as its motto “Right is of no Sex—Truth is of no Color—God is the Father of us all, and we are all Brethren” and was published until 1851.

After briefly sharing some background knowledge about Frederick Douglass, project or provide students copies with “Our Paper and Its Prospects,” the opening editorial from The North Star’s first edition.  Read the text aloud while students follow along, explaining to students that Douglass is following a publishing convention when he uses “we” to refer to himself.  Then lead a discussion around the text using questions such as

After discussing the editorial, have students brainstorm social issues they feel passionately about.  Then invite them to consider the needs of a modern audience and write an opening editorial for an imaginary publication devoted to the betterment of their cause.

This biographical entry on Douglass from the Encyclopedia of Southern Culture offers a brief but excellent overview of his life and impact.

This collection includes letters from abolitionists, articles and accounts written by Frederick Douglass included in three of his famous newspapers.

Grades
6 - 12
|
Lesson Plan
|
Standard Lesson
Comparing Portrayals of Slavery in Nineteenth-Century Photography and Literature
In this lesson, students analyze similarities and differences among depictions of slavery in The Adventures of Huckleberry Finn, Frederick Douglass' Narrative, and nineteenth century photographs of slaves. Students formulate their analysis of the role of art and fiction, as they attempt to reliably reflect social ills, in a final essay.
Grades
6 - 8
|
Lesson Plan
|
Standard Lesson
Persuading the Principal: Writing Persuasive Letters About School Issues
Students learn that you don't have to raise your voice to raise a point. Writing a persuasive letter to your principal is a great way to get your opinions heard.
Grades
K - 12
|
Student Interactive
|
Writing & Publishing Prose
Printing Press

The interactive Printing Press is designed to assist students in creating newspapers, brochures, and flyers.