Hans Christian Andersen was born on this date in 1805. 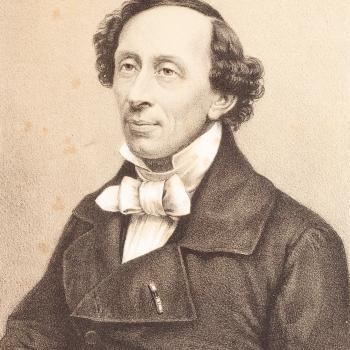 Hans Christian Andersen is often referred to as the "father of modern fantasy." More than 200 years after his birth, Andersen's tales are still enjoyed by both young and old alike.

Many of Hans Christian Andersen's stories have been adapted and abridged into animated movies. Begin the activity by asking students to write a brief summary of The Little Mermaid, The Nightingale, The Emperor's New Clothes, or another of Andersen's stories. Then read students the original story and ask them to create a Venn diagram that indicates the similarities and differences between the two versions of the tale. Have them use their diagrams to write essays that compare the two versions. Students could also be encouraged to explain which version they prefer and why. Students can also use the Fractured Fairy Tales interactive to write their own alternative versions of several well-known fairy tales.

From the Hans Christian Andersen Center at the University of Southern Denmark, students can link to texts, research material, and information about Andersen's life and works.

This website celebrates Andersen through the stamps that have been inspired by his work. Included are over 30 of Andersen's stories, accompanied by images of related stamps.

Scholastic invites students to explore fractured fairy tales with author Jon Scieszka. Classroom activities are provided, along with a place for students to publish their own tales and read those of other students.

Grades
K - 8
|
Calendar Activity
|
Author & Text
Jon Scieszka was born in 1954.
Students review Scieszka's tips for encouraging young people to read and then create their own, sharing ideas with adults in their community through a letter.