John Ronald Reuel Tolkien was born on this day. 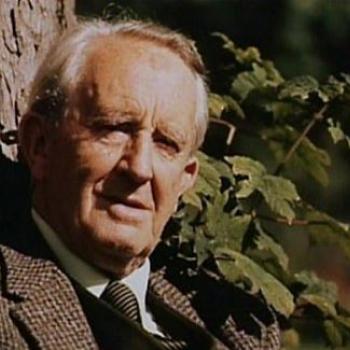 J.R.R. Tolkien, Oxford don and professor of linguistics and medieval literature, was born in South Africa on this day in 1892. He is best known for his creation of the elaborate mythological world of Middle Earth. A tale told originally for his children's amusement, The Hobbit was published in 1937 to great acclaim. His more substantial work for adults, The Lord of the Rings, became a literary watershed with an inestimable impact on popular culture. Tolkien died in 1973.

With the film versions of The Lord of the Rings and The Hobbit having become so popular in recent years, there is a good opportunity to compare the differences between print and nonprint media. Start with a brainstorming session on how movies tell their stories. Students may need prompting, but eventually they will generate a list that will likely include music, characters, costumes, settings, and acting. Then, ask students to think about how books or novels tell their stories; some things on this list will overlap with the first.

Next, have students read an excerpt from a Tolkien novel. One that works well is the scene from the first chapter of The Fellowship of the Ring in which Gandalf convinces Bilbo to leave the ring behind. Then, view the corresponding scene in the film version. This scene can be found at roughly 0:25.00 on the time counter. After viewing, have students write about changes the filmmakers made and, most important, why they made these changes.

As a final step, have students return to any text that they are currently reading in class and imagine how a particular scene might be filmed. Ask students questions such as the following: What music would be used? What actors would play the roles? What costumes would they wear?

The goal of this site is "to encourage and further interest in the life and works" of Tolkien by providing information about "the books he wrote, his life, and books others have written about him." It is a must-stop for Tolkien fans.

Explore pictures of real-life locations in Scotland, paired with descriptions that Tolkien used to describe his Middle Earth, at this National Virtual Museum site from the United Kingdom.

On J.R.R. Tolkien and the Creation of the Modern Fantasy Novel

The History of Literature Podcast takes a fresh look at some of the most compelling examples of creative genius the world has ever known. This episode covers J.R.R. Tolkien.

Grades
9 - 12
|
Lesson Plan
|
Standard Lesson
Preparing for the Journey: An Introduction to the Hero Myth
Students read a variety of picture books that contain elements of the hero's journey and use an online interactive tool to analyze the stories.
Grades
9 - 12
|
Lesson Plan
|
Unit
Tracking the Ways Writers Develop Heroes and Villains
Everyone knows that Star Wars character Darth Vader is a villain. This lesson asks students to explore how they know such things about heroes and villains they encounter in texts.
Grades
9 - 12
|
Professional Library
|
Book
Reading in the Dark: Using Film as a Tool in the English Classroom
In this practical guide, John Golden makes direct links between film and literary study by addressing reading strategies (e.g., predicting, responding, questioning) and key aspects of textual analysis.
Grades
6 - 12
|
Student Interactive
|
Inquiry & Analysis
Hero's Journey
Students can use this tool to learn about the elements of the hero's journey, analyze a text that follows the hero's journey pattern, or start creating a hero story of their own.