Reading Literature in Translation: Beowulf as a Case Study 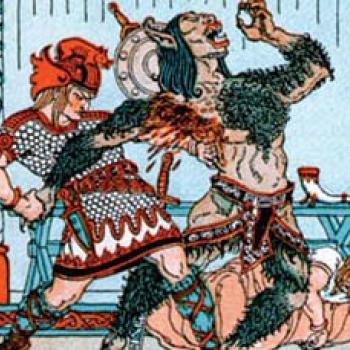 While Beowulf is generally considered the earliest major work of English poetry, it is almost always taught in translation and its verse form and poetic techniques are often unfamiliar. By comparing a number of translations of Beowulf with each other and with the basic poetic elements of Old English alliterative verse, this lesson asks students to reflect upon the nature of translation not as an act of accurate representation of a literary work but as an act of interpretive re-creation. Students first listen to several translations of a passage from Beowulf , keeping a running list of how the translations differ and why the differences may exist. Next, groups of students compare new translations of the passage with the Old English poem using the checklist previously created. Finally, students share their findings as a class and discuss what it means to translate literary works and the decisions that translators make.

Literary Guide: Beowulf: This online tool provides students with an overview of the poem with details on its language and poetics, as well as information about translations of the work.

In his article, John Niles reminds us that translations of a literary work are not the literary work itself, but an "imaginative reconstruction" of it. Regardless of whether or not a translation is good or bad, a translation reflects a number of interpretive choices made by the translator. For instance, the translator of a literary work is confronted with the fact that it might not be possible to accurately represent the style, diction, grammar, syntax, meter, rhythm, connotation, ornamentation, verse form, and use of language of the original work, and therefore they must decide which, if any of characteristics of the original, will be attempted. Likewise, translators must decide whether or not their translation should strive to be a work of art in its own right or if it should sacrifice artistic quality for accurate representation.

Literary Guide: Beowulf
Readings from Beowulf
An Introduction to Beowulf: Language and Poetics
The Electronic Introduction to Old English
Grendel's Dog, from Beocat
Beowulf: A Study Guide
Resources for the Study of Beowulf

Students focus on the figurative language in Heaney's poem, "Digging," and discuss the speaker's attitude, and how metaphor, simile, and image contribute to the poem.

Grades
9 - 12
|
Lesson Plan
|
Standard Lesson
Exploring The Prologue to The Canterbury Tales using Wikis
Students study Chaucer's Canterbury Tales not just for its rich language, but also for the insights it provides into the Middle Ages. Using wikis, students collaborate to study both literature and history on their own terms. They create meaning and build information networks using tools Chaucer himself would have loved.
Grades
Grades
6 - 12
|
Strategy Guide
Close Reading of Literary Texts
This guide provides strategies for choosing text that is appropriate for close reading and to plan for instruction.