Jonathan Swift was born on this day in 1667. 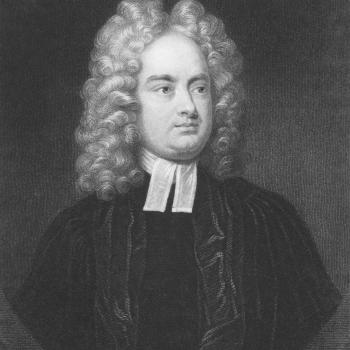 Anglo-Irish writer Jonathan Swift was born on November 30, 1667. Swift is famous for works including Gulliver's Travels, A Modest Proposal, and A Tale of a Tub. Known for his satirical writings, as well as his poetry and essays, Swift also wrote under several pseudonyms, including the name Isaac Bickerstaff.

A Modest Proposal is considered to be one of the best examples of satire ever written. Have students explore the elements of satire and parody using the lessons below. Then, have them extend that exploration by surveying instances of satire and parody in television and film, advertising, and journalism. Begin by dividing students into three groups and assigning each to either television and film, journalism, or advertising.

This site, part of the Victorian Web, includes a biography of Swift, information about the political and social context of his time, his views on religion, and more.

Read a brief biography of Swift at the HyperHistory Online page. Also included is a link to related information.

<i>Gulliver's Travels into Several Remote Nations of the World</i>

This website offers the full text of Swift's Gulliver's Travels, available online or in PDF, Kindle, and several other formats.