Poet Emily Dickinson was born in 1830. 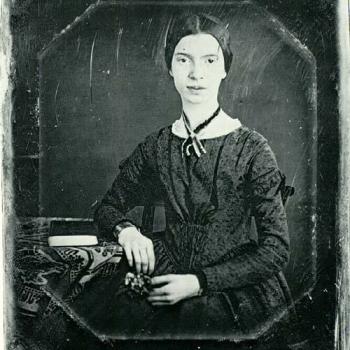 Emily Dickinson wrote nearly 1700 poems, though fewer than 10 were published in her lifetime. Her style, consisting of unorthodox phrasing, imagery, syntax, and capitalization, was considered too radical at the time she wrote. Today, Dickinson's work is considered among the greatest in American literature.

Use one of Dickinson's most famous poems, "This Is My Letter To The World", for a classroom activity on how audience affects voice.

Discuss the poem with your students, focusing on the idea that the speaker was writing to a "world" that did not care about him or her and that he or she wanted to be treated gently. Ask students to imagine themselves stranded on a desert island for 10 years. Have them use the ReadWriteThink Letter Generator to write two letters to send off the island in two separate bottles. One letter should be addressed and written to someone they know and care about. The second letter should be addressed and written to the world at large (i.e., no one person in particular). See the Letter Generator page for more information about this tool.

After this exercise, students should consider how much of their writing depended on the audience. Have them examine word choice, subject, and tone in each letter.

This website offers a remarkable collection of poetry, scholarly articles, and classroom activities dedicated to Dickinson's work. The site also links to similar resources for the poetry of Walt Whitman.

Included on the Poets.org website, this page includes a student-friendly biographical entry about Dickinson, a few of her poems, and links to other related websites.

The University of Virgina offers the text of numerous Dickinson poems. Brief biographical information about Dickinson is also included.

Students explore using electronic messaging and Internet abbreviations for specific purposes and examine the importance of using a more formal style of writing based on their audience.

Grades
9 - 12
|
Lesson Plan
|
Minilesson
Is a Sentence a Poem?
Students use their own poetry to analyze syntax, imagery, and meaning in a one-sentence poem by a canonical author to decide what makes it a poem.
Grades
3 - 5
|
Lesson Plan
|
Standard Lesson
Dancing Minds and Shouting Smiles: Teaching Personification Through Poetry
Students learn about personification by reading and discussing poems and then brainstorm nouns and verbs to create personification in their own poems.
Grades
K - 12
|
Student Interactive
|
Writing & Publishing Prose
Letter Generator