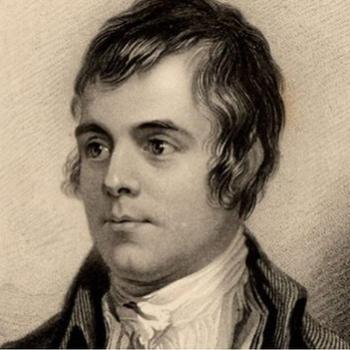 Considered Scotland's national bard, Robert Burns was born to poor tenant farmers in 1759. The author of "Auld Lang Syne," Burns became famous after he published his first volume of poetry, written in the Ayrshire dialect of Lowland Scots. When he died at age 37, 10,000 people turned out for the funeral of their beloved "Rabbie" Burns. Every year on this day, many Scots celebrate his honor with a ritual dinner of haggis and scotch whisky.

In addition to being a poet, Robert Burns collected traditional Scottish ballads. To celebrate his birthday, introduce students to the ballad form. Share elements of the ballad with students. Ballads are a part of oral tradition. They celebrate a desirable attribute, tell a story, or herald a significant event, and they often contain a refrain. The metrical and rhyming structure of ballads can take many forms. Here is one type of ballad stanza, which follows a strict formula:

Read some examples of traditional Scottish ballads to familiarize yourself with their basic characteristics.

Next, have students brainstorm two lists: one should include qualities they admire in people they know, and the other should contain significant events that have happened recently. Have students choose one item from either list as a subject for a ballad. A good way to start is for students to try writing the refrain first and then try writing a stanza, adhering to the formula above. You may want to have students read-or perform-their ballads aloud.

Burns Night, from the BBC

Getting ready for your own Burns Night celebration? This BBC website includes biographical background material, poetry text, and audio (useful to demonstrate accurate pronunciation of Scots). Even more importantly, the site includes step-by-step details on hosting a traditional Robert Burns supper, including links to recipes for haggis, the traditional Scottish dish made from sheep stomachs, lamb livers, and oatmeal.

This website offers information about the National Trust for Scotland site established at Burns' Scottish birthplace.

This Poets.org webpage offers a biography of Burns and links to a selection of his poetry.

Students read sonnets, charting the poems' characteristics and using their observations to deduce traditional sonnet forms. They then write original sonnets, using a poem they have analyzed as a model.