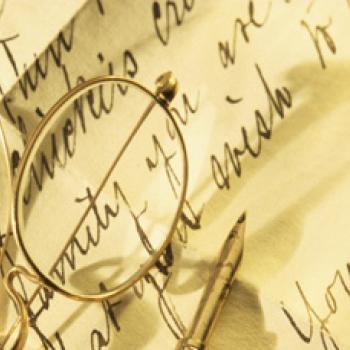 In this lesson, students read and analyze sonnets to discover their traditional forms. Students chart the poems' characteristics, including the poetic features and their emotional responses to the poems. They then review the details for similarities, deducing traditional sonnet forms that the poems have in common. After this introduction, students write original sonnets, using one of the poems they have analyzed as a model.

Traditional Sonnets for Analysis: Here are links to the text of traditional sonnets.

Sonnet Characteristics Chart: Using this tool, students enter information about sonnets they are analyzing, including the number of lines and stanzas, lines per stanza, rhyme scheme, meter, and other observations.

Albert Somers, author of Teaching Poetry in High School, asserts that the "business of structure seems to be the poetry teacher's greatest bugaboo" (145). We find ourselves searching for a balance between "analyzing poetry to death" and "voices [that] clamor for the teaching of culture and art and the way art-including poetry-works" (145). Teachers are left trying to find the instructional technique that reaches that balance. Somers explains:

"The most prevailing approach is deductive: define the terms, give examples, and have the students find them in poems. In some ways, the method is logical and efficient. Yet year after year, most of our students barely tolerate our efforts. Few recall it with affection, and fewer reflect upon it later as a source of insight and inspiration." (146)

Somers suggests that teachers use the opposite strategy: "Instead of definitions, begin with generalizations. Actually begin with specifics (poems) that lead to generalizations-inductive teaching" (146). This lesson adopts just such an inductive strategy, providing students with examples of the sonnet form and asking them to find the similar characteristics that unite the poems. In the process, students determine the form of traditional sonnets.

Informal feedback from student groups, as they read one another’s sonnets, provides students with the reactions of a audience of readers. For formal assessment, use the Shakespearean Sonnet Checklist which is tied to the key characteristics of the form.