On the Road author Jack Kerouac embarked on his first cross-country road trip in 1947. 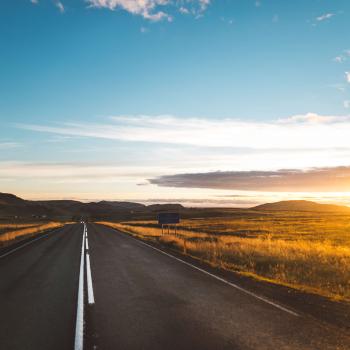 Jack Kerouac published his most famous novel, On the Road, in 1957, but his depiction of the iconic road trip was actually inspired by two real-life trips Kerouac took ten years before, in 1947 and 1949. This influential novel, with its spontaneous and unconventional writing style and its focus on drugs and disillusionment, helped to define the Beat Generation, a social and literary movement of the 1950s that also included William S. Burroughs and Allen Ginsberg.

For high school students, begin a discussion by asking:

Afterward, read a section from On the Road that deals with the aspects of cross-country travel and that reflects Kerouac's unique writing style. An appropriate excerpt from the novel can be found at this Literary Kicks site.

Lead students in a discussion with the aim of characterizing Kerouac's style. Then ask students to attempt to emulate his stream-of-consciousness style with their own written narrative in which they blend their road trip from the opening discussion with details from vacations and trips they have taken in the past.

Stories, anecdotes, interviews and audio about Jack Kerouac and his writing.

This American Museum of Beat Art site dedicated to Kerouac incoludes a biography, bibliography, and links, including one to Dharma Beat, a Kerouac newszine. This site is part of a larger archive and collection of works pertaining to the Beat Generation.

Time Magazine's original review of On the Road will give students a sense of how the book was received when it was first published in 1957. Time chose Kerouac's book as one of the 100 most important modern novels written in English.

When students try to model their own narratives using Kerouac's style, this University of Pennsylvania site will help identify the components of his style, form, and process.