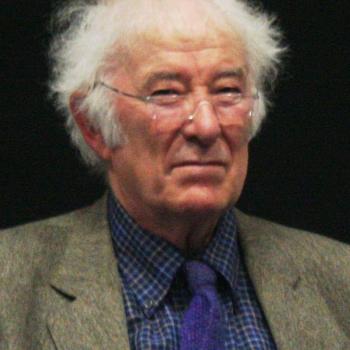 Seamus Heaney was born in Ireland on April 14, 1939. He published his first volume of poetry in 1965 and has gone on to publish nearly a dozen collections as well as a critically acclaimed translation of the epic Beowulf. Heaney has also written important prose about writing poetry, including The Government of the Tongue and The Redress of Poetry. An active promoter of the art of writing poetry, Heaney won the Nobel Prize in Literature in 1995. He died in 2013.

Share with students one of Seamus Heaney's most famous poems, "Digging." Ask students to focus on the figurative language the speaker uses to characterize himself as a writer, especially as he compares himself to his father and grandfather. Challenge students to discern the speaker's attitude toward himself as a writer, and how metaphor, simile, and image contribute to their understanding and appreciation of the poem.

Using Heaney's poem as an inspiration, invite students to write a poem that uses an extended metaphor (or a series of metaphors or other comparisons) to express their own attitudes toward themselves as writers. Point out that the speaker of "Digging" expresses his attitudes by comparing his pen positively to a gun, and then later, his pen both positively and negatively to a shovel or spade. Encourage students to use, as Heaney does, specific, vivid images to support the comparison they make.

The Internet Poetry Archive offers a collection of Heaney's poetry, along with a biography, bibliography, and more.

The Nobel Prize in Literature 1995

Seamus Heaney: "I live in panic over the next poem."

The BBC offers this interview with Heaney, in which he discusses his writing. For a lengthier lecture and a reading by Heaney, visit MITWorld's A Reading by Seamus Heaney, a video recording of a lecture given by Heaney at MIT.

This online guide provides an overview of the poem, details on its language and poetics, and an exploration of the translations of the work. Both the original version and a modern translation of the poem are available online in an interactive format.

Students are introduced to Old English and the poetic devices of alliteration, kenning, and compounding in preparation for reading the epic poem Beowulf.