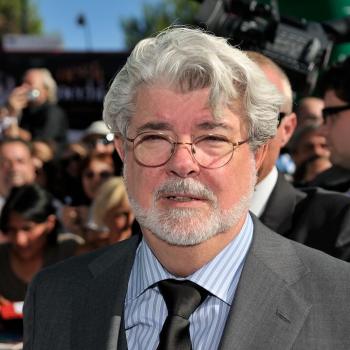 As he was writing the script for the original Star Wars films in the 1970s, George Lucas spent a great deal of time reading and interviewing mythologist Joseph Campbell, whose ideas included a concept called "The Hero's Journey," the archetypal hero story that is found in cultures around the world. Lucas based much of his plot for the films on the stages of this journey, which, along with a relentlessly successful advertising campaign, might help explain the films' amazing popularity.

Use The Hero's Journey Interactive tool to describe how Luke Skywalker meets each stage of the journey:

Then, brainstorm other works that use the formula, such as The Lord of the Rings.

Star Wars: The Magic of Myth

This National Air and Space Museum exhibit highlights elements of myth and the Hero's Journey in the Star Wars films. Also included are image galleries and audio clips.

This post connects Star Wars and Campbell's Hero's Journey. References to the original films are included.

This page provides resources related to the series of books based on the Star Wars films.