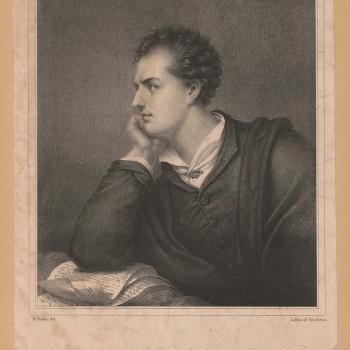 In this lesson, students access their own knowledge of characters from a variety of texts to make comparisons between the familiar concepts of hero and villain and the new concept of the Byronic hero, a term coined from Lord Byron and his writings in the 19th century. They first list heroes and villains with which they are familiar and discuss any examples that may blur the lines between the two. Using Stephenie Meyer's Twilight and the character Edward Cullen, students identify the characteristics of the Byronic hero in a Venn diagram and diagram other characters with these traits. Students then choose a project—an expository essay, photo collage, or book cover—to extend their understanding of this complex and compelling character type.

This lesson uses Edward Cullen as an example, but it may be adapted to focus on any Byronic hero that would be appropriate for your classroom.

Examples of the Byronic Hero: This printable sheet includes lists of Byronic heroes in literature, comics, film, and video games.

In her English Journal article "In Search of a Hero, in Search of a Self," Susan Arpajian Jolley notes that when discussing the definition of hero with her students, she "quickly discovered that students hadn't given much thought to the concept of heroism, except to regard firefighters and other emergency workers, especially those who were involved in the 9/11 rescue mission, as heroes" (24).

Just as students need to be challenged to refine and extend their thinking of heroes in real life, they can be moved to think critically about "Beowulf...and Macbeth, classic literary heroes who are prototypes of real and fictional characters in our modern world" (23).  This lesson introduces students to a notion of hero that will challenge their thinking of the literary concept and encourage them to see complex shades of meaning between the terms "hero" and "villain."

The Official Website of Stephenie Meyer
Immortals and Vampires and Ghosts, Oh My!: Byronic Heroes in Popular Culture
The Byronic Hero in Film, Fiction, and Television
The Satanic and Byronic Hero: Overview
The Life and Work of Lord Byron 1788-1824

Grades
K - 12
|
Printout
|
Graphic Organizer
Venn Diagram, 2 Circles
Students use this graphic organizer to describe similarities and differences between two objects.
Grades
K - 8
|
Student Interactive
|
Writing & Publishing Prose
Book Cover Creator
The Book Cover Creator is designed to allow users to type and illustrate front book covers, front and back covers, and full dust jackets. Students can use the tool to create new covers for books that they read as well as to create covers for books they write individually or as a class.
Grades
K - 12
|
Student Interactive
|
Organizing & Summarizing
Story Map

Grades
7 - 12
|
Calendar Activity
|
Historical Figure & Event
Star Wars creator George Lucas was born in 1944.
Students use the Hero's Journey interactive to describe how Luke Skywalker meets each stage of his journey, and then brainstorm other works that use the formula.