Susan B. Anthony voted on this date in 1872, leading to her arrest. 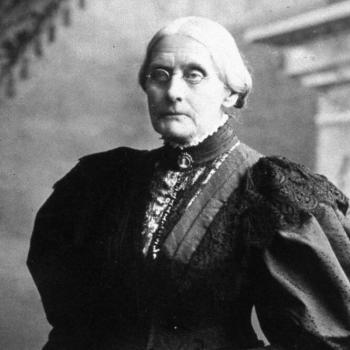 On November 5, 1872, Susan B. Anthony cast a ballot in the presidential election, though women at the time were prohibited from doing so. Two weeks later, she was arrested, and the following year, she was found guilty of illegal voting. It would take another 50 years until the Nineteenth Amendment, passed in 1920, would grant women nationwide the right to vote.

Two of the most important lessons that we can draw from Susan B. Anthony's experiences are to understand the effects of prejudice and to appreciate the courage of acting on one's convictions.

So, on this day, grant special privileges to an arbitrarily designated group in your classroom: people wearing, say, the color red, or blondes, or people whose names start with S. These privileges could include a treat, a special hall pass, etc. You should not let anyone in on why you have singled this group out. Let the privileges-and the complaining about them-continue for a while. Then, ask students to write about how they felt during the simulation. Ask them to focus on the fairness of your actions in singling out this group for special treatment.

Susan B. Anthony Dares to Vote!

This article describes Anthony's trial. Interestingly, she was not allowed to testify in her own defense because of her gender, and the judge entered the guilty verdict without allowing the jury to deliberate.

This site honors Americans who have "gone the extra mile" by volunteering their time and effort to the cause of improving the lives of others. This site tries to pass on the spirit of volunteerism and commitment.

One Hundred Years toward Suffrage: An Overview

The American Memory Project includes this timeline of important events in the history of the women's suffrage movement.

Not For Ourselves Alone

This online companion to the Ken Burns documentary of the same name uses text, audio, and images to explore the women's suffrage movement, focusing on Susan B. Anthony and Elizabeth Cady Stanton.

Grades
3 - 5
|
Lesson Plan
|
Unit
Voting! What's It All About?
Students explore a variety of sources for information about voting. They evaluate the information to determine if it is fact or opinion, and then create a graffiti wall about voting.
Grades
4 - 5
|
Lesson Plan
|
Standard Lesson
Vote for Me! Developing, Writing, and Evaluating Persuasive Speeches
This lesson encourages students in grades 4 and 5 to think critically and write persuasively by focusing on preparing, presenting, and evaluating mock campaign speeches.
Grades
9 - 12
|
Lesson Plan
|
Standard Lesson
From Friedan Forward—Considering a Feminist Perspective
Students write letters expressing personal views on issues like equal pay, equal education/employment opportunity, and gender rolesand receive these letters six years later.
Grades
9 - 12
|
Lesson Plan
|
Unit
That's Not Fair! Examining Civil Liberties With the U.S. Supreme Court
Students have the right to have fun in this lesson in which they create a PowerPoint presentation about civil rights and the Supreme Court.