The ABCs of Poetry 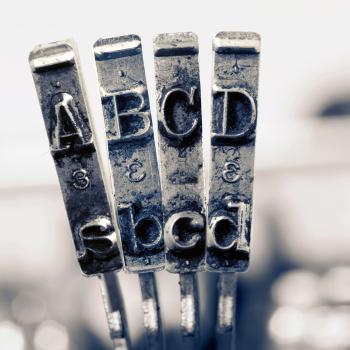 This activity allows students to play with words and letters in an imaginative way. Students make the familiar strange by creating image pools of metaphor derived from a single letter in the alphabet. As a class, students look at a letter and brainstorm things that it looks like. They then flip the letter on its sides and upside down, brainstorming new images each time. Next, they brainstorm interesting words that start with that letter. They then put some of the words they have brainstormed together as a poem. After creating the poem as class, students write their own letter poems, using the same process. Students can use an online tool to publish their poems in a class book. As a group exercise, this activity builds community: everyone learns from each other. As an individual exercise, it builds confidence and allows everyone the chance to create an original chain of images.

Model Alphabet Poems: Share these model poems with students as inspiration before they write their own letter poems.

Alphabet Organizer: Students can use this interactive tool to print an alphabet chart or pages for an alphabet book.

"All poets start from love of words and wordplay," says United States poet laureate Donald Hall (Their Ancient Glittering Eyes: Remembering Poets and More Poets, Ticknor and Fields, 1992) . This exercise allows students to use their unique knowledge and experience to take something ordinary and familiar and make it new and exciting. As a whole class activity, this exercise builds community and helps all students see that each of their classmates has important contributions to make. Later, as an individual activity, students gain confidence creating original images using figurative language. This is important since "poetry-merely whispering its name frightens everyone away" (1). The simplicity of this assignment makes it nonthreatening and ensures success for all students.

Optional: Using Self-Reflection questions, ask students to think about the steps they took as they worked on their poems—what they had problems with, how they worked out their problems, and how they feel about their final draft.