Authoring an Epilogue That Helps Our Characters Live On 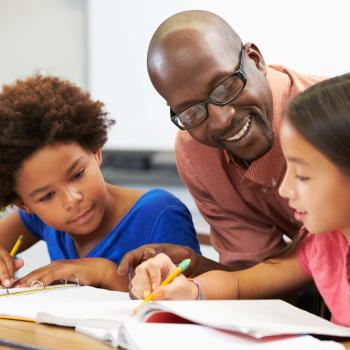 This lesson will teach how characters evolve across a story, and that often times the important changes are subtle. This lesson uses accountable-talk during a read aloud of One Green Apple by Eve Bunting to demonstrate how, as readers, students can use the traits of their character as a lens through which to interpret deeper, more significant changes stirring within. They will ultimately use those observations about their characters to author an epilogue for their books. The epilogue will allow students to demonstrate what they have learned about their main character, and it will allow the teacher to assess how well the students understand their characters and the changes their characters experienced across the text.

In this article, Fisher explains the importance of using specific adjectives to describe characters in order to better understand them. Fisher describes adjectives as tools writers use to bring characters to life for the reader. When students begin to notice static and dynamic characters they can then begin to think about what causes characters to change across a text. Additionally, the author also emphasizes that not every adjective fits the character and that students need to find evidence in the text to support their inferences, thus encouraging close reading of the text.

A Teacher’s Guide to books by Eve Bunting

This website features some of Eve Bunting's popular picture books with accompanying activities and resources that support children's understanding of the books themselves.

The video on this website shows an interview of Eve Bunting in which she explains how she goes through the writing process, shares some of her personal history, and gives some background on her beloved children's books. There are additional resources for parents and educators that support many areas in reading.

Student Art Work: All About Me Collages

On this website there are examples of student artwork based primarily on the human form. The "All About Me" collages feature cutouts the artist made to depict him or herself in the center with adjectives that describe him or her encircling the cutout.

Grades
3 - 5
|
Lesson Plan
|
Standard Lesson
Using Picture Books to Teach Characterization in Writing Workshop
Students explore character development through experiences with picture books. They learn about the connections between reading and writing and apply the information they learn to revisions of their own writing.
Grades
3 - 5
|
Lesson Plan
|
Standard Lesson
Inferring How and Why Characters Change
Students will really get into character when they read short stories and analyze the how's and why's of characters' behaviors.
Grades
3 - 10
|
Calendar Activity
|
Author & Text
Author Eve Bunting was born in Ireland in 1928.
Students listen to a news article about the LA race riots and then read Smoky Night to discuss how a younger observer might be affected by these events and their perceptions.