The Comic Book Show and Tell 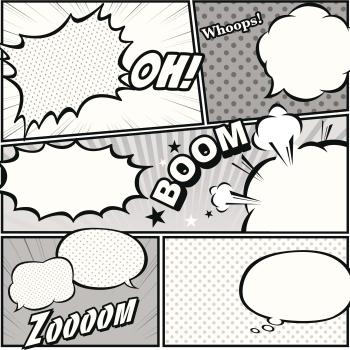 Certain kinds of texts ask for both descriptive and instructional writing: comic book scripting requires the writer to give the artist detailed, descriptive instructions while also crafting exciting dialogue and otherwise rich language. In this lesson, students encounter an authentic writing experience designed to get them thinking about their choices as writers and how they can best get their mental images out of their head and on the page. After exploring how comic books are made and learning terms and techniques associated with the genre, students write their own comic book scripts. They then pass their script to another student, who draws the script as close to form as possible based on the information the writer provided.

Although students interact with story elements such as plot, character, and setting as well as with the writing process in brainstorming and drafting, the major focus of this activity is on revision.

Comic Book Primer: This handouts gives an overview of the roles involved in creating a comic book, as well as the parts of a comic book.

Comic Book Scripting Techniques: This handout offers detailed directions and examples of how a comic book is scripted.

Moffet says of sensory writing that "Whatever the material, it must already appeal to them [students]" (32). Comics are very popular with students, especially the various Manga series. Moffet recognizes scripting as a "flexible learning means that can very effectively teach many aspects of writing and discourse-more than teachers yet appreciate" (46). Teacher still need help recognizing the educational value of comics as well, so this activity can help educate every member of the classroom. Most comics today are produced via the DC Comics-style or "full script" style, where a writer completes a full script and then passes the work along to the visual artists. As well, Moffet asserts that "Practical tryouts remain for all scripts the best entrance into discussion and revision" (54), so we have a formula for an authentic writing activity that really packs a punch. Pow!

Students create a short, humorous story with at least one action character, and then use online tools to make a flipbook.