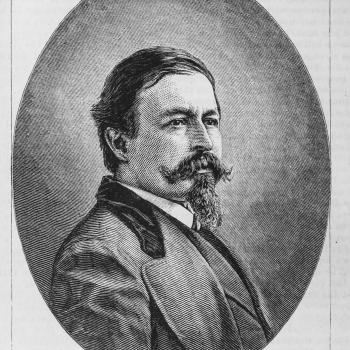 Thomas Nast was born on September 27, 1840. He was a 19th- century caricaturist and editorial cartoonist and is considered to be the father of American political cartooning. During the Civil War and Reconstruction era, Nast was well known for his cartoons supporting American Indians, Chinese Americans, and the abolition of slavery. Some of the images and icons he created or popularized include the Republican Party elephant, the Democratic Party donkey, and Uncle Sam.

After students have completed their work, consider having them published in the school newspaper, or share them in the school library.

This extensive resource on Nast, offered by The Ohio State University, includes a biography, timeline, portfolio of Nast's cartoons, bibliography of works by and about Nast, and a teacher's guide. Also included is an essay titled "The World of Thomas Nast."

EDSITEment offers this collection of lesson plans and other resources on free speech and the First Amendment.

This ReadWriteThink resource links to information about First Amendment issues.

Grades
9 - 12
|
Lesson Plan
|
Standard Lesson
Freedom of Speech and Automatic Language: Examining the Pledge of Allegiance
This lesson has students explore freedom of speech by examining the Pledge of Allegiance from a historical and personal perspective and in relationship to fictional situations in novels.
Grades
6 - 8
|
Lesson Plan
|
Standard Lesson
Exploring Free Speech and Persuasion with Nothing But the Truth
Students read Avi's Nothing But the Truth and examine the First Amendment and student rights, and then decide whether the rights of the novel's protagonist, Philip, are violated.