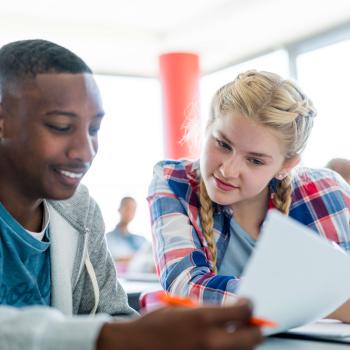 When students write argumentative or persuasive essays, they often ignore the viewpoints of their opponents, the potential readers of their essays. In this minilesson, students respond to a hypothetical situation by writing about their position on the subject. After sharing their thoughts with the class, students consider the opposite point of view and write about arguments for that position. They then compare their position with that of their potential audience, looking for areas of overlap. They then revise their arguments, with the audience's point of view and areas of commonality in mind. Examining the opposing view allows students to better decide how to counter their opponent logically, perhaps finding common ground from which their arguments might grow. Thus, the activity becomes a lesson not only in choosing arguments but also in anticipating audience reaction and adapting to it.

"Finding Common Ground" Hypothetical Scenario: Use this scenario to prompt student writing about both sides of the argument.

Interactive Venn Diagram: Students can use this online tool to compare any two items, including varying positions on an argument.

On Becoming a Person (Rogers)

In On Becoming a Person, Carl Rogers outlines theories of problem solving and conflict resolution that involve a clear articulation of the opposing viewpoint before the author advances his or her own arguments. He writes:

Each person can speak up for himself only after he has first restated the ideas and feelings of the previous speaker accurately . . . . Once you have been able to see the other's point of view, your own comments will have to be drastically revised. You will also find the emotion going out of the discussion, the differences being reduced, and those differences which remain being of a rational and understandable sort. (332-33)

Given Rogers' viewpoint, the activity based on his theory helps students think more logically in addressing their target audience.

The OWL at Purdue: Logic in Argumentative Writing

Collect students’ in-class writing and Venn diagrams, or informally assess participation in the discussion. Their work during this session can also be included with the final essay as evidence of their process.

Ask students to reflect on the process they use to construct a formal argumentative essay. Have them include the analysis of the audience’s point of view and the process by which they choose their own arguments to counter them when they submit their work.